Governor Andrew M. Cuomo announced the launch of a new public awareness campaign reminding New Yorkers that the first increase to the minimum wage will go into effect on December 31, 2016. 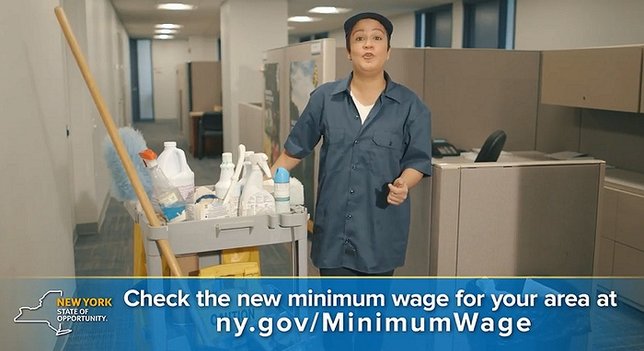 Workers who do not receive raises should call the Department of Labor hotline at 888-4-NYSDOL to report their employer.

The ads will run in both English and Spanish and be featured on television stations across the state. Minimum wage workers who do not receive their raise by December 31, 2016 should call 1-888-4-NYSDOL to report their employers.

The campaign marks the first benchmark of the phase-in schedule for the minimum wage increase, which will ultimately reach $15 an hour and impact more than 2 million workers in all industries across the state.

"No one who works full-time should be condemned to a life of poverty and that's why New York took action to raise the wage and provide the opportunity of a decent life to millions of hard working New Yorkers," Governor Cuomo said. "As we reach this milestone for a more fair and a more just New York, we are reminding workers they are owed a fair day's pay for a fair day's work and this administration will work to ensure they receive the wage increase to which they are entitled."

The two 30-second public service announcements remind New Yorkers that all minimum wage workers across the state will receive a raise on December 31, and educate them about the steps they should take if they do not receive their raises. The New York State Department of Labor has established a hotline (1-888-4-NYSDOL) where minimum wage workers can call to report any employers who do not comply with the phase-in schedule.

$15 Minimum Wage Phase-in
The $15 minimum wage legislation was passed as part of the 2016-17 state budget, and marks a major accomplishment in the Governor’s efforts to restore economic justice and fairness to working families in New York State. The phase-in schedule on a regional basis is as follows:

It is estimated that more than 2 million people will be affected by the increases in the minimum wage. A regional breakdown of the number of workers earning below $15 is available below:

More information is available at www.ny.gov/minimumwage.