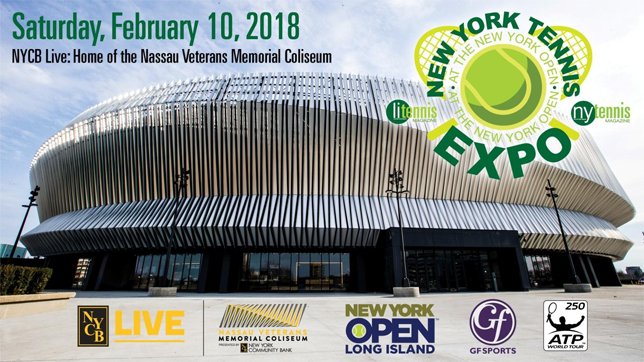 Wantagh, NY - December 22, 2017 - The Long Island and New York tennis communities have been anxiously awaiting the return of the New York Tennis Expo, the community’s largest free, grassroots tennis event. On Saturday, February 10, that wait is over as the 2018 New York Tennis Expo arrives at NYCB Live, home of the Nassau Veterans Memorial Coliseum, and will serve as the lead-in event for the inaugural New York Open.
The Expo will kick off Long Island’s first professional tennis tournament in nearly two decades as the ATP World Tour 250 Series tournament, the New York Open, which features top players such as John Isner, Kei Nishikori and the Bryan Brothers, comes to Long Island.
As a part of being the lead-in event for the tournament, the New York Open Draw Ceremony will take place at the Long Island/New York Tennis Magazine Broadcast Plaza in the center of the Expo Hall and there will be professional players on hand to sign autographs and take part in meet and greets. Attendees will also have access to watch the pro players practice for the tournament.
“We are thrilled to kick off the first annual New York Open with the New York Tennis Expo on Saturday, February 10,” said Josh Ripple, New York Open Tournament Director. “The Open and Expo’s mutual goal is to create compelling, interactive content for tennis enthusiasts and afford industry leaders a unique chance to expose its products and services to as many people as possible. By integrating the ATP Tour into the Expo, we believe that exhibitors and attendees will have a rare opportunity to be the first to see how the tournament venue will look, hit on the competition courts and meet ATP Tour players. And it provides many New Yorkers the chance to reconnect with Nassau Coliseum following its $180 million renovation. A win-win for everyone.”
The Expo will also once again feature informative and topical discussions featuring industry experts on subjects including “Road to College Scholarships” and “Taking Your Game to the Next Level”. Attendees will have the opportunity to ask questions during the speaker sessions and learn from some of the best coaching minds in tennis.
The Expo’s expansive Activity Zone will feature the New York Islanders Ice Tour. There will be 10 & under mini tennis courts sponsored by USTA Eastern for kids to play on, and opportunities for attendees to play on the stadium courts, which will be used by the professionals during the New York Open. The Activity Zone will also play host to a Speed Serve booth provided by Sportime so you can see if your serve measures up with the professionals!
New to this year’s Expo will be the addition of the Beach Tennis Arena and a Tennis Apparel Fashion Show, which adds a new layer of tennis fun to the event. Come try your hand at beach tennis and have some fun in the sand despite the winter weather outside. You can also check out the latest in tennis fashion with our Fashion Show which will showcase our local high school and college tennis players modeling the latest in tennis apparel.
We are honored to once again bring our community the New York Tennis Expo, and are especially excited to partner with the New York Open to make the event possible. We encourage tennis fans and non-tennis fans alike to come to NYCB Live on Saturday, February 10 for a free day of fun and see what the Expo is all about.
If you preregister for the 2018 New York Tennis Expo, you will receive complimentary parking on the day of the event. Visit www.newyorktennisexpo.eventbrite.com for your preregistration ticket as well as to stay up to date on the latest news and announcements regarding the Expo.