The Coastal Research and Education Society of Long Island (CRESLI) is pleased to announce its schedule for the 2014-2015 seal walk season. 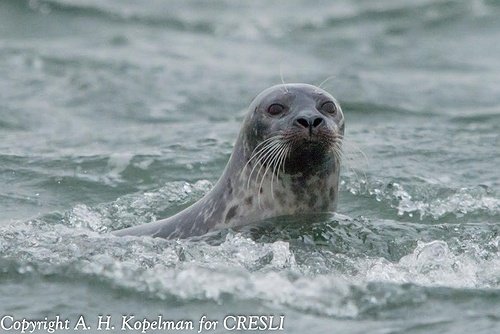 Photo by: A.H. Kopelman for CRESLI

Westhampton, NY - December 19, 2014 - Mark your calendars! The Coastal Research and Education Society of Long Island (CRESLI) is pleased to announce its schedule for the 2014-2015 seal walk season.

The CRESLI Seal Research Program monitors seal populations and continues to conduct a long-term behavioral and population studies of seals around Long Island, including regular observations at a major haul out at Cupsogue Beach Park. Population counts at Cupsogue over 9 years and elsewhere over the 18 years have indicated a significant and continuing increase in the number of seals utilizing Long Island's waters, as well as shifts in the species residencies and composition.

Historically, Long Island's seal species typically included harbor and grey seals.  Over the past decades, arctic species, such as harp and hooded seals, once rare for Long Island, are being seen more frequently.  A two-hour naturalist led walk is available to learn about, observe, and photograph seals in the wild.

Reservations are required and should be made at the website. There is a suggested donation of $5 per adult and $3 for those under 18 - please note that weather will play a significant role in determining the seal walk schedule.

WHERE: CRESLI seal walks at Cupsogue Beach Park (at the western end of Dune Road in Westhampton Beach) will depart from area near the fence at the western end of the parking lot The walk is approximately 1.3 miles round trip and take about 2 hours. Meeting times are 15 minutes prior to departure. Children are welcome to participate.

The Coastal Research and Education Society of Long Island (CRESLI) was founded in 1996 by a group of experts in marine mammal science, environmental sciences, education and conservation. CRESLI was formed for the purposes of conducting research, providing educational experiences and promoting conservation of coastal ecosystems.  Research and education are inextricably linked in all CRESLI activities. As such, CRESLI actively seeks cooperative alliances with researchers, educational institutions, and the participation of the public. Our pinniped and cetacean research projects, for example, utilize public whale watch cruises and seal walks as platforms for collecting data and educating the public at the same time.