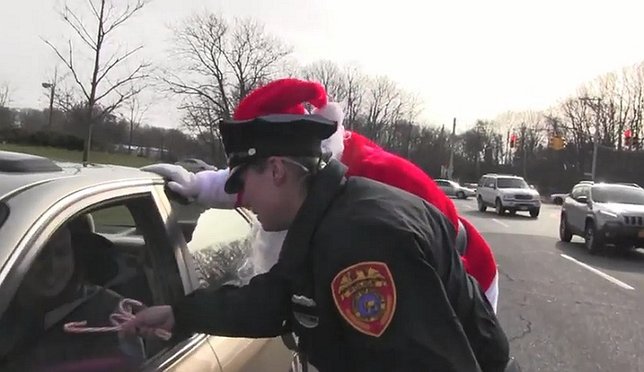 Holiday cheer is spread with officer dressing up as Santa.

The officer, dressed as Santa, gave holiday cheer and smiles.

In the passenger seat of a Suffolk County Police vehicle, Officer Acevedo picked families to pull with Officer Brianne Yarborough by his side. Together, they gave away several Target gift cards and candy to unsuspecting drivers in Suffolk County, Long Island.

“I was getting yelled at at first then I noticed it was Santa,” said John Campbell of Patchogue.  Campbell’s son, Declan, enjoyed his candy cane in the back seat.  Campbell said the traffic stop made his family very happy.  “It's a good start to Christmas and with our son in the car; it's great,” Campbell said.

The officers also enjoyed the un-routine traffic stops.  “For once it's a great feeling to pull cars over,” said Officer Yarborough.  “A lot of times we pull them over and we're the bearer of bad news,” Yarborough added, “To see the faces of these children, you can't beat that.”

“We're dropping them a $50 gift card  to Target just to say Merry Christmas from the Police Department,” said Santa, A.k.a. Officer Acevedo.  “It's nice to see the kids eyes light up and the smiles on their faces; it's fantastic,” Santa added.