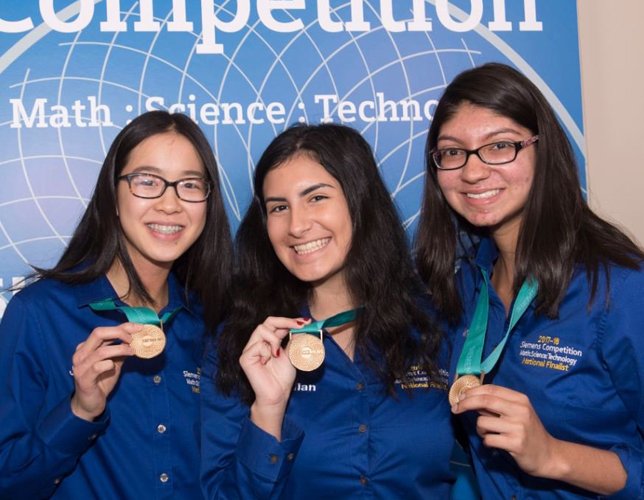 Dix Hills, NY - December 5, 2017 - Three students in the Half Hollow Hills Central School District have won the prestigious 2017 Siemens Competition, the nation’s premier competition in math, science and technology for high school students. This is the second year in a row that Half Hollow Hills has fielded national finalists. Last year, Half Hollow Hills West alumna Alice Wu advanced to the finals.
Congratulations to the Half Hollow Hills students who achieved this highest honor:
“These students have produced incredibly high-quality research on some of the most complex issues we face today,” said David Etzwiler, CEO of the Siemens Foundation. “We are proud of the work these high school students are conducting to solve difficult challenges and improve the lives of people around the world.”
The group’s submission investigated the role of a protein called CCDC11 during the process of cell division, and not only validated its presence in a structure called the midbody, which is only present in dividing cells, but they also mapped the regions of the protein that localize it to the midbody site. The protein they researched seems to have a significant, yet previously unknown, function which has the potential to mitigate the effects of degenerative diseases such as Alzheimer’s and Huntington’s, and inhibiting the spread of viruses.
The students virtually presented their research this past weekend to a panel of judges at the George Washington University, and won the top team prize of $100,000.
“Three months ago when we were sitting in the lab, achieving this level of the competition seemed like a distant dream,” said Ahmed. “We are beyond grateful and excited to have the opportunity to engage in this experience.”
The Siemens Competition, launched in 1999 by the Siemens Foundation, increases access to higher education for students who are gifted in STEM and is based on the culture of innovation, research and educational support that is the hallmark of Siemens. The competition, administered by Discovery Education, develops a pipeline for the nation’s most promising scientists, engineers and mathematicians.
ABOUT HALF HOLLOW HILLS
An education-oriented community with high academic expectations, the Half Hollow Hills Central School District is located in a residential area of 50,000 people in the central part of Long Island, approximately 40 miles from New York City. Providing for the education of more than 8,000 students, the school district has five elementary schools, two middle schools and two high schools. Half Hollow Hills High Schools are fully accredited by the New York State Department of Education and the Middle States Association of Colleges and Schools. The District is committed to providing students opportunities to excel in academics, athletics, and the arts.