“Glen Cove residents continue to display an awe-inspiring level of generosity in the aftermath of this devastating fire,” Legislator DeRiggi-Whitton said. 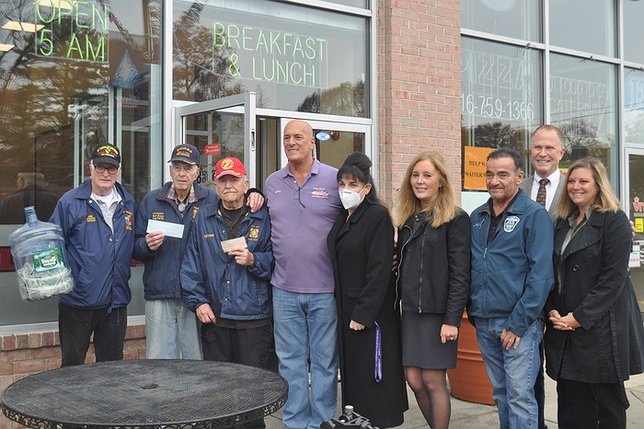 Photo by: Office of Legislator DeRiggi-Whitton

More than $2,000 in new donations were presented to leaders of Glen Cove VFW James Donohue Post 347 recently during a special event at Long Island Bagel Café in Glen Cove.
The second floor of Glen Cove VFW James Donohue Post 347 was badly damaged by fire in mid-August. Officials said that insurance will not cover all costs of rebuilding the multi-purpose community center, which was hand-build in 1920 by Post members.
Since the blaze, Long Island Bagel Café owner John Compitello has continued to encourage patrons to open their hearts and their wallets to give what they can toward the effort. On Monday, Mr. Compitello presented a water jug filled with cash donations to VFW leaders, as well as a $500 personal donation. Glen Cove resident Mary Stanco, who serves as the Glen Cove Chamber of Commerce, further supported the cause by making a personal donation of $1,500 toward rebuilding efforts.
“Glen Cove residents continue to display an awe-inspiring level of generosity in the aftermath of this devastating fire,” Legislator DeRiggi-Whitton said. “As the VFW continues to marshal the resources to rebuild, these donations send a clear message that we are forever thankful for the generations of men and women who risked everything to defend our freedoms as Americans.”