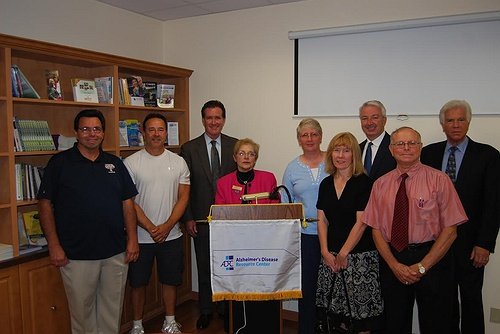 Bay Shore, NY - September 16, 2014 - On September 15, Mary Ann Malack-Ragona, Executive Director/CEO, Alzheimer’s Disease Resource Center, Inc. (ADRC), was joined by New York State Senators Phil Boyle and John Flanagan, ADRC clients and their families and caregivers to announce that the organization has had its grant from the New York State Department of Health restored. The money would be used to continue providing its programs and services: care and consultation; support groups; and educational programs.

ADRC entered into a five-year contract with the NYS Department of Health in 2008 in which the group would receive funding from the agency. In 2012, the funding stopped after the local organization disaffiliated itself from the national chapter to set up ADRC. As a result, ADRC was unable to offer one of its 14-week training sessions and its physician education programs. To cover the cost of other programs, the organization had to resort to using its operating funds.

In late 2013, Ms. Malack-Ragona met with representatives from the governor’s office, the Office of the Budget, the NYS Office of the Aging and the NYS Department of Health to discuss the lost funding and impress upon those in attendance how important that funding is to Long Island families affected by Alzheimer’s who are receiving ADRC’s services. Ms. Malack-Ragona also reminded those in attendance that, while ADRC has a new name, the work that the agency was performing for the community had been ongoing since 1983 and had been funded by the state since 2004. When Governor Cuomo introduced the state budget for this year, Senator Boyle and Senator Flanagan submitted legislation that ADRC’s grant be reinstated. The request was included in the final budget.

“After a two-year battle, Senator Flanagan and Senator Boyle have been successful in having our program funding restored,” Ms. Malack-Ragona said. “What is really significant about this grant is that it now puts back the funding that was lost. This grant will help us continue with the work we do here at ADRC, which is ensuring quality care for our local families who are coping with the challenges of Alzheimer’s disease.”

“We are pleased to help Alzheimer’s Disease Resource Center regain access to this much-needed funding so it can provide the assistance our communities need. ADRC is a vital organization that provides help to those who suffer from this debilitating disease and those who care for them. This money will help extend the organization’s reach and benefit many of our friends and neighbors,” stated Senator Flanagan.

“This is a significant day for Alzheimer’s Disease Resource Center and for Long Island families with those who suffer from this disease,” Senator Boyle said. “I also wish to applaud Ms. Malack-Ragona for the work she has done to make sure they receive the services and help they need.”