Stony Brook University Hospital Chief Trauma Surgeon Dr. James Vosswinkel will be honored, along with members of police and fire departments during the NY Jets game. 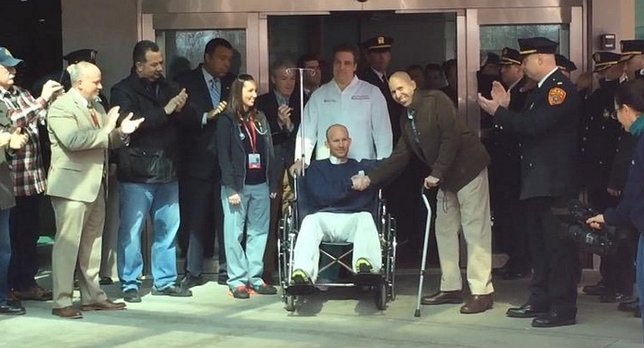 Pictured is Suffolk County police officer Mark Collins being discharged from Stony Brook University Hospital just 4 days after the shooting. He is pushed in a wheelchair by Dr. Vosswinkel with officers and supporters cheering.

Dr. Vosswinkel, who was instrumental in saving the lives of two critically injured Suffolk County Police Officers:  Detective Nicholas Guerrero was struck by a vehicle fleeing a traffic stop in 2014 suffering a severe head injury and Police Officer Mark Collins was shot multiple times in the line of duty during a foot pursuit in 2015. All three men will be honored along with seven other members of the Suffolk County Police Department during the Jets game against the Indianapolis Colts. The night has been designated to recognize first responders from the tri-state area.

Dr. Vosswinkel personally directed the care for these two members of the Suffolk County Police Department who suffered life-threatening injuries while on duty.

Detective Guerrero and Officer Collins will be present to inform Dr. Vosswinkel that he will be attending the game to be honored with other members of the police department.