For the third consecutive year, Massapequa High School Sophomore Veronica Wetzel organized a holiday food drive in her community that will not only provide a Thanksgiving meal to hundreds of families in need, but will ... 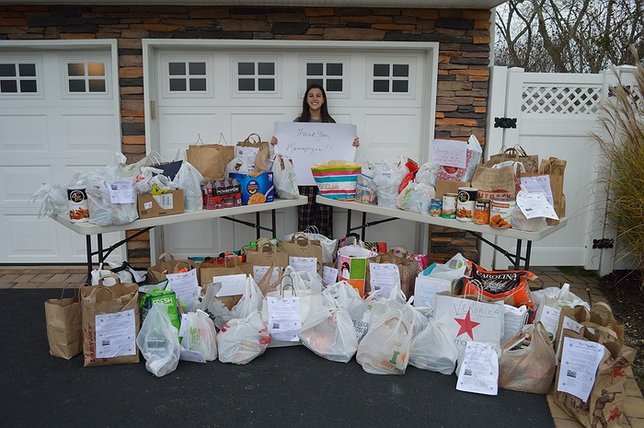 Massapequa, NY - November 25, 2015 - For the third consecutive year, Massapequa High School Sophomore Veronica Wetzel organized a holiday food drive in her community that will not only provide a Thanksgiving meal to hundreds of families in need, but will also show these families, who have been hit the hardest by the challenging economy, just how much they are cared for.

Wetzel doesn’t take anything for granted.  While she enjoys a big Thanksgiving dinner with her family every year, she knows that there are plenty of people who are far less fortunate – even in her own community.  That’s why the 10th grader organizes an annual food drive to benefit her church’s food pantry. And with the help of her generous neighbors, it’s always a success.  This year, the teen collected enough food to feed 200 families ― double what her 2014 drive collected.

“I just collected the food,” said Wetzel modestly. “It’s my neighbors who were amazingly generous. “Some families donated several grocery bags of food or crates of canned soup.  One neighbor donated bags of food AND a 20-pound bag of rice!  I was blown away by the support and compassion my neighbors showed.” Wetzel added that one family even included a recipe in its donation bag. “It was awesome!”

No matter how big or small the donation, each one helped make a positive impact. And Rosemary Graziano, director of the Church of St. William the Abbot Roman Catholic Church Social Ministry Office in Seaford, was overwhelmed by the contribution.

“Keeping our pantry well stocked year round can be difficult enough, but especially around the holidays when additional families reach out,” said Graziano.  “Thanks to Veronica, we can provide not only food, but also hope and a promise that people truly care.” Graziano added, “It’s amazing how one young person can coordinate and rally her neighbors to positively impact 200 families right here in our own community.”

One week before the Nov. 21 collection, Wetzel went door-to-door to the 400 homes within a half-mile radius of her Ensign Drive home, and dropped a flier in each mailbox. The flier provided a list of non-perishable food ideas that could help make a Thanksgiving dinner for a family in need. One week later, with help from her father Ralph Wetzel, she again went door-to-door, collecting shopping bags and cartons full of food, which they piled into the family SUV.

“It’s so heart-warming to see the neighbors come together,” said Susan Wetzel, Veronica’s mother. “In the week leading up to the collection, we even found bags of food on our front steps because some people were afraid they would forget to put out the bags the following Saturday.  That’s how committed they were to supporting Veronica’s effort.”

The teen first launched her annual Thanksgiving food drive in 2013 after seeing first hand how SuperStorm Sandy devastated her own community. Massapequa was hard hit by the storm, leaving families displaced.