A Tale of Two Eagle Scouts: Brotherly Love Builds a Gazebo for a Bridge at Caleb Smith Park

Nick Krizek an Eagle Scout built a gazebo at Caleb Smith State Park Preserve in Smithtown. He built it next to the Willow Pond Bridge that his brother Ryan had built as his Eagle project ... 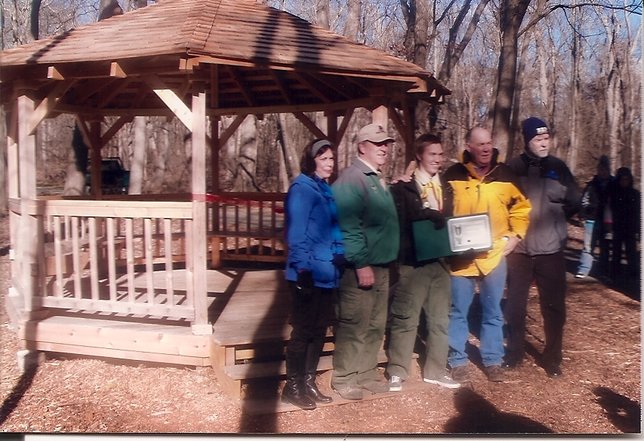 The close relationship of two brothers can now be seen permanently in a bridge and gazebo at Willow Pond in the 543-acre Caleb Smith State Park Preserve in Smithtown.

On November 24th, the Willow Park Gazebo built by Nick Krizek, a sixteen year old Eagle Scout member of Troop 565 in Smithtown was officially dedicated at the Park. The gazebo stands near the Willow Pond Bridge that was built in 2008 by his older brother, Ryan Nocella for his Eagle Scout Project. At the gazebo's dedication, Former State Senator Brian X. Foley presented Nick with an official NYS Certificate of Recognition, and thanked him for his contribution to the park, and the local community.

“The location of my brother’s bridge was the inspiration for where I wanted to build the gazebo,” said Nick, a junior at Smithtown High School West. “Ryan and I are very close and the bridge and gazebo symbolizes that. I didn’t want it built anywhere else.”

The dedication of the gazebo and sign unveiling at Willow Pond took place on a frigid day that brought out nearly fifty attendees, including family, friends, scouts, state and park officials that were more than happy to brave the cold temperatures for the proud event. The new sign notes the brothers’ names, the date of completion of their projects, and a telling quote that reads: “Two brothers achieving their goals.”

The 12-foot octagonal gazebo, which has seating on five sides, was built with the help of his father Michael, Nick said, adding that some of his fellow scouts worked on the floorboards. The project began in earnest in June 2012, and like many lives here on Long Island, was interrupted by Hurricane Sandy, which shut the park down for months, said his mother Sue. “When Nick began again, he was met head-on by the Blizzard of 2013”, she said in expressing her son’s determination to complete the project.

The Willow Park Gazebo took a total of 400 hours to build, Nick said, adding that they worked on it for many Sundays over the past year.

Scout Leader Bill Ingram, who has led Troop 565 for nine years, said, “The gazebo and the bridge are two of the more lengthy projects taken on by our scouts. They were aggressive projects. Ryan and Nick knew they would be difficult but they succeeded. They are nice kids, and they chose to do it here.”

Nick, an assistant senior patrol leader of his scout troop, said the project consumed him for over a year “...I was dreaming of gazebos and seeing them all over the place.” The charismatic teen thanked individuals and groups, including the Friends of Caleb Smith Preserve, for his success. Also, his parents, sisters Danielle and Arianna, state and park officials, his music teacher, his scout troop and the senior patrol leader Jon Ingram.

Park spokesman Bill Bohach said “Nick overcame lots of adversity and storms to build the gazebo and it came out great!” He added that a proposed future project by a scout troop will benefit fishermen while in the Nissequogue River.

Nick said when he graduates he hopes to go on to college and minor in criminal justice. He plans to be a police officer, he said.

Ryan, now 22, has since graduated from the School of Visual Arts where he studied cinematography and is currently working in the film industry.