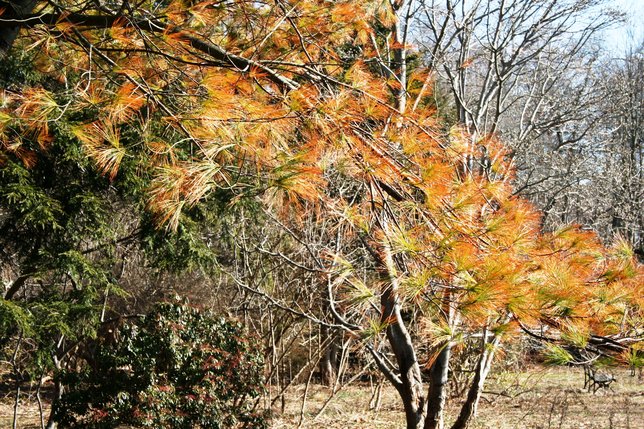 Albany, NY - April 2013 - The New York State Office of Parks, Recreation and Historic Preservation completed a number of environmental stewardship projects to prevent the spread of invasive species, protect rare plants and animals, and improve natural habitat at parks across the state. The projects were completed with funding from Governor Andrew M. Cuomo's New York Works initiative and with the assistance of many local partners.

"The New York State Parks are enjoyed by millions every year for vacations, sightseeing and recreation," State Parks Commissioner Rose Harvey said. "The heart of the 330,000-acre park system is its natural beauty, open spaces and diversity of plant and animal life. As we celebrate Earth Week, these projects demonstrate New York State's ongoing commitment to the stewardship of our irreplaceable natural resources."

Of the 12,000 known rare species and significant habitats in New York, over 1,700 occur in NY state parkland. State Parks contain 91 animal species monitored by the New York State Natural Heritage Program, including 31 state endangered or threatened animal species and 23 globally rare animal species (species with 100 or less known occurrences worldwide). Nearly half of the species on the federal list of endangered species are at risk at least in part, due to invasive species. State Parks environmental stewardship projects are designed to protect and enhance rare species and important habitats by taking critical steps such as removing invasive species. Projects completed or underway with a total of $311,500 from the 2012-13 New York Works funding include:

Clark Reservation and Chittenango Falls State Parks contain the rare American hart's-tongue fern (AHTF), one of only a handful of New York plants protected under the federal Endangered Species Act. Approximately 80% of the known AHTF in the US are found at these State Parks. Competition by non-native invasive plants is the primary threat, with swallow-wort being the most serious problem. The project removed invasive plants and established 100-foot invasive species prevention zones around the ferns. This project trained professional staff and a volunteer force largely recruited from local schools, colleges, and universities with an early detection and rapid response approach to controlling the invasives. In addition, the project embraced State Parks' newly formed partnership with SUNY College of Environmental Science and Forestry (ESF) by employing eight ESF students, including three graduate students that are doing master's level research, management, education and outreach for the AHTF conservation project.

Donald J. Leopold, Ph.D. and Distinguished Teaching Professor and Chair of the Department of Environmental and Forest Biology at SUNY-ESF, said, "Without State Parks' strong commitment to conservation, the majority of the very rare hart's tongue fern in the U.S. would be at great risk."

"We commend Governor Cuomo and Commissioner Harvey for their strong commitment to enhancing our State Parks through the New York Works program, and for dedicating important resources for habitat improvements," said Erin Crotty, Executive Director of Audubon New York. "In particular, we're delighted that State Parks is targeting investments to restore grassland habitat at Green Lakes State Park, which will directly benefit declining grassland birds species found here. Green Lakes State Park has the potential to provide nearly 400 acres of grassland habitat, which would be the largest expanse of grasslands within the State Parks system, and we look forward to continuing to work with State Parks, Onondaga Audubon, and the neighboring Sisters of St. Francis' Alverna Heights to make this exciting prospect a reality."

Design was funded through 2012 NY Works and construction will begin this summer on a project to restore wetlands with native plants and create a pond habitat. The project will convert what was previously a large and generally unused expanse of lawn into a natural area. Plantings, seeding and ongoing management of vegetation will be assisted by local partners, including the Finger Lakes Institute and students from Hobart & William Smith Colleges.

Sarah A. Meyer, Community Outreach Coordinator of the Finger Lakes Institute, said, "The Finger Lakes Institute began partnering with Seneca Lake State Park in 2005 in hosting our annual International Coastal Cleanup and collaboration has continued with the park acting as a site to conduct research on fish and wildlife and ecological restoration, invasive species management and monitoring, and environmental education. The information exchange that has occurred between the Finger Lakes Institute, Hobart and William Smith faculty and students and the State Park to date has proven invaluable to the region as we hope to continue to encourage environmental stewardship together into the future."

Watkins Glen State Park is severely infested by Hemlock Woolly Adelgid (HWA), an invasive insect that can kill all the hemlocks in the park if left untreated. The eastern hemlock (Tsuga canadensis) is valuable because it provides clean water, essential fish and wildlife habitats, and hosts a diversity of fungi and insect communities. Dying trees would threaten the safety of visitors on the popular Gorge Trail, and adversely impact the ecology of the stream and aesthetics of the park. With $50,000 in New York Works funding and a $97,000 U.S. Forest Service grant, State Parks hired contractors to safely apply the treatments to trees on the cliff sides and edges to eradicate the insects and bring declining trees back to health. Long term monitoring set up in conjunction with NY Natural Heritage Program and Cornell University scientists will determine efficacy of treatments and hemlock health over time.

Mark Whitmore, Forest Entomologist at Cornell University, said, "Hemlocks are a keystone species in the forests of New York, providing unique habitat essential to the survival of flora and fauna like our native brook trout. The Hemlock Woolly Adelgid has the potential to kill most if not all of our hemlocks. It is important to identify priority sites in the state like Watkins Glen SP where we can preserve high value hemlock stands for the future and implement cutting edge management strategies as an example for other currently uninfested areas."

A wetland complex at John Boyd Thacher State Park is particularly important to two species of mole salamanders. Both yellow-spotted salamanders and Jefferson salamanders (New York State species of Special Concern) use deep-water areas of these wetlands for breeding in early spring. However, the loss of beaver activity in the area has resulted in lower overall water levels and, thus, a reduced and degraded breeding and nursery habitat. With input from Siena College, regional natural resource staff constructed by hand several small water diversion structures throughout the wetland complex to increase water depth in certain areas and to improve breeding habitat. In conjunction with this project, a local Boy Scout troop further reduced impacts on the salamander breeding habitat by building a new boardwalk to elevate a popular trail. Approximately 200 feet of boardwalks were constructed to route the trail out of the wetland, resulting in improved water quality while providing interesting and functional trail amenities.

"I have received thanks from individuals that have used the walkway, generally saying how much more improved the trail is, but I know the boardwalk could have never been completed without the staff's help and cooperation. I always suggest Thatcher Park to scouts looking for projects," said Joshua Clark, Eagle Scout, of Boy Scout Troop 73.

Swan Lake, an 18-acre man-made lake located within Rockefeller State Park Preserve, requires a small maintenance dredging project near the inlet. The area in the vicinity of the lake inlet has had issues with sedimentation, causing this portion of the lake to become stagnant and clogged with aquatic plant growth. Design and permitting has been conducted for the dredging to open up channels on either side of an island at the inlet that will increase water circulation to the lake, improving both the habitat and the overall aesthetic appeal of the lake.

Constitution Marsh, part of the Hudson Highlands State Park Preserve that is managed through a partnership with NY Audubon, is an ecologically significant Hudson River tidal marsh, supporting a diverse array of animals and plants, including at least eight rare species as documented by the NY Natural Heritage Program. However, the marsh contains large patches of Common Reed or Phragmites that are encroaching on the native marsh vegetation. Although Phragmites has been in the U.S. for thousands of years, recent research has confirmed that a more aggressive type was introduced to North America which decreases quality of wetland habitat, particularly for wading birds and waterfowl. The goal of this control program is to restore the native plant community to support the native flora and fauna of the marsh. By cutting or flattening the Phragmites stands and covering them with black fabric to prevent growth, Audubon staff was able to limit the use of herbicides to spot applications where the use of the black fabric was not effective or practical.

"Audubon and State Parks have had a long history of collaboration in maintaining this amazing sanctuary and the birds and other wildlife it supports," said Eric Lind, Director of the Constitution Marsh Audubon Center. "The funding provided by the New York Works program has helped us implement an innovative program to reduce the threat of the invasive reed in this unique tidal marsh, and we applaud Governor Cuomo and Commissioner Harvey for prioritizing these investments and confronting invasive species at State Parks head on."

Wellesley Island State Park is important habitat for several turtle species deemed to be Species of Greatest Conservation Need, including one that is listed as Threatened in New York and Ontario. This project expanded an open, sparsely vegetated area with good sun exposure and relatively loose soils, tripling the size of this ideal nesting habitat in the park. SUNY Potsdam college students will monitor the impact of these changes and to determine the success of this nesting habitat creation.

SUNY Potsdam Professor, Dr. Glenn Johnson said of the project, "This is a wonderful opportunity to collaborate and cooperate with agencies that are responsible for the management of these rare species and to engage students in work that is directly related to their future careers."

"An overabundance of deer impacts people and biodiversity – from car collisions to the disappearance of plant species," says Troy Weldy, Director of Ecological Management for The Nature Conservancy in New York. "Funding from the New York Works program is critical to our ability to assess these impacts. This information informs our deer management strategies so that we can protect our forest for the benefit of people and nature."

Last year, Governor Cuomo committed $89 million through the New York Works initiative to rehabilitate dozens of state parks and historic sites, enabling State Parks to move forward with over 100 overdue projects to improve 55 parks and historic sites. Most projects were health and safety-related improvements and critical infrastructure rehabilitation, including upgrading drinking water systems, repairing deteriorated restrooms and replacing dilapidated playgrounds. Additionally, the funding set aside over $311,500 to complete priority environmental stewardship projects. This year, the State Budget provides $90 million for state parks for the next round of the New York Works capital program to address the backlog of environmental capital needs and spur job creation and economic development.

The New York State Office of Parks, Recreation and Historic Preservation oversees 179 state parks and 35 historic sites, which are visited by 60 million people annually. A recent study by commissioned by Parks & Trails New York found that New York State Parks generates $1.9 billion in economic activity annually and supports 20,000 jobs.For more information on any of these recreation areas, call 518-474-0456 or visit www.nysparks.com, connect on Facebook, or follow on Twitter.