This is the week when the biggest Black Friday bargains and deals begin! Check out our Black Friday Shopping Guide for the latest steals and deals to complete your holiday shopping! 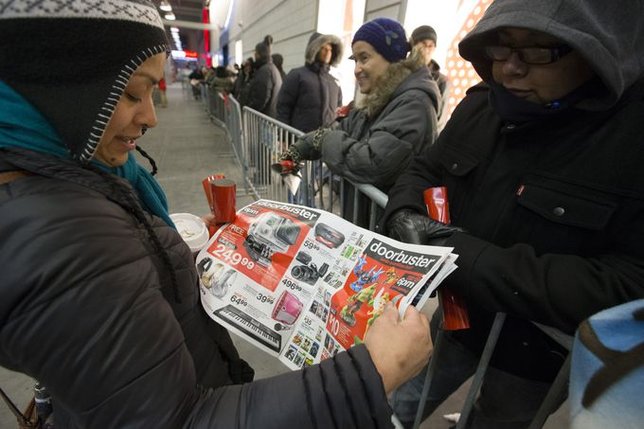 Shopper looking through circular with doorbuster deals for Black Friday.

Retailers are competing neck and neck from brick and mortar stores to online. You can continue to expect to see great savings and deals on things like TVs and laptops, but when it comes to Apple products don’t expect to get the best bang for your buck at the Apple Store. Lindsay Sakraida at DealNews, an aggregator of online deals informed “FORTUNE” that you’ll get a better break at retailers like Best Buy, Amazon and Target (as you’ll see below).

When it comes to smartphones, the deals we saw last year where you can pay $0 on the phone by just signing a contract is likely no more with wireless carriers moving to no-contract plans.

While there’s a bit of a change to what we saw last year – even Staples is reverting back to the original tradition of closing shop on Thanksgiving Day and opening its doors on the actual “Friday” for Black Friday, there are still great savings and deals to reap.

Retailers Opening on Thanksgiving Day to Kick Off Black Friday

Where The Steals & Deals Are: Black Friday circulars are coming out left and right, but we’ve made it easy by highlighting some of the best offers. Be sure to check the circulars yourself (links above or visit WalletHub for more Black Friday ad scans) for additional details on any restrictions or specific hours for the offers.

Here's who will be closed on Thanksgiving Day:

Whether you plan to stick to the brick and mortar stores or shop online this holiday season, expect valuable savings and deals this Black Friday! Remember to check back here again for new updates and sales around Black Friday! Also check out tips for surviving Black Friday!

And remember, the savings don’t stop here – check out our Cyber Monday Guide!