The Macy's Thanksgiving Day Parade delights millions each year. Here's what to expect from it this year! 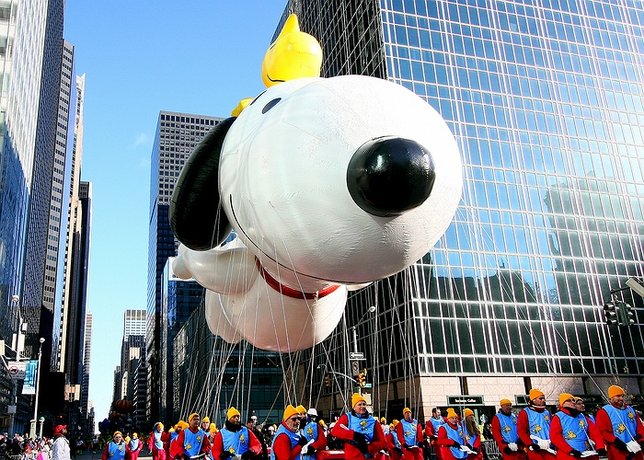 The 89th Annual Macy’s Thanksgiving Day Parade is right around the corner, and it’s ready to kick-off the holiday season with cheer this November! Each year the Parade draws millions of people to New York as well as at home on television to enjoy the celebration and sights of amazing balloon characters, floats, and performances by today’s top stars, marching bands and more! This year the parade kicks-off starting at 9 a.m. on Thursday, November 26th!

The 2.5 mile parade route begins at 77th Street and Central Park and eventually makes it way to 6th Avenue to stop in front of Macy’s Herald Square. You can get the best views following the parade route from 59th-28th streets or watch it on television through the live broadcast. If you’re really anxious to see the giant balloons, go see the balloon inflation process the night before the Parade from 3 p.m. to 10 pm. There are special balloon inflation areas surrounding the Museum of Natural History beginning at 79th Street and Columbus Avenue.

New Giant Character Balloons for 2015 include:

There will also be all-time favorite character balloons returning, including Adventure Time with Finn & Jake, Diary of A Wimpy Kid®, The Elf on the Shelf®, Hello Kitty®, How to Train Your Dragon’s Toothless, PADDINGTON™, Pikachu™, Pillsbury™ Doughboy™, Skylanders® Eruptor, Snoopy & Woodstock, SpongeBob SquarePants, the Red Mighty Morphin Power Ranger and Thomas the Tank Engine®. Returning balloonicles include the famed-spokesduck The Aflac Duck and the supercool KOOL-AID Man.

The annual Parade in New York City continues to entertain many each year and has grown to more than 3.5 million spectators and more than 50 million television viewers nationwide, according to Macy's! The Parade tradition began in 1924. It was the idea of Macy’s employees. The first parade featured animals from the Central Park Zoo. After huge delight and success with the first parade, Macy’s declared it would become an annual event. Over the years, many new characters have joined the parade, including Felix the Cat, Mickey Mouse, Popeye, and Snoopy. In 2014, new additions included Pikachu, Thomas the Tank Engine, Paddington Bear, and the Red Mighty Morphin Power Ranger.

Other Fun Facts about the Macy’s Thanksgiving Day Parade

If you plan to head into the City for the parade using LIRR, please view the train schedules here.