Since 1986, Clams Used in Environmental Program by Babylon Town 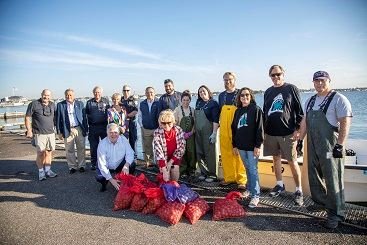 Planting shellfish offers a natural way for environmentalists to help improve water quality around Long Island - both on the North and South Shores.

Suburban sprawl across the region created an alarming environmental crisis. The bays of the South Shore had become so polluted that the shellfish population plummeted. It got to the point where shellfish were only filtering 1% of the water in the bays, compared to 1976 when they filtered up to 40 percent.

Programs to help put back these natural filters back into the waterways were given a big assist when Superstorm Sandy cut a swath of land on Fire island, opening up a new inlet that created a flow of ocean water, essentially flushing out the Great South Bay.

Read: Oyster Farmers in Great South Bay Harvesting Crops While Saving the Waters for more on the inlet and its effect.

Babylon Town recently announced that it had transplanted thousands of live hard clams into the bay as part of the annual Hard Clam Program. The program began in 1986 to restock a specific area of the Great South Bay that is conducive to spawning. The area, known as Spawner Sanctuary, was picked as a result of a study conducted by Stony Brook on where to place adult clams in specific areas so they will spawn, resulting in a higher incidence of fertilization.

This is one of many programs that puts shellfish into the Great South Bay. Last year, a local environmental group - Friends of Bellport Bay - hit a milestone, planting 1 million oysters in the bay, the culmination of a 5-year effort. The last 50,000 oyster seeds were planted in October to hit the mark.

“The clam population is currently spread so thin that we don’t get the fertilization in the water that we used to get back in the day,” said Babylon Town Waterways Management Supervisor Brian Zitani. “Our goal is to try and manifest natural reproduction among clams with the hope of helping to increase the population size.”