The shellfish help filter the water improving clarity and quality of the bay. 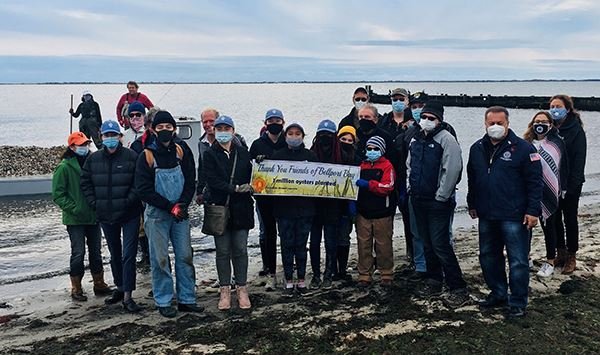 Oysters are an important part of the strategy environmentalists employ to clean up Long Island’s waterways. Each oyster is capable of filtering 50 gallons of water every day. Suburban sprawl on Long Island has severely damaged the ecosystem polluting the bays of the South Shore to the point where surviving shellfish were filtering only 1 percent of the water, compared to 1976 when they filtered up to 40 percent.

After Superstorm Sandy provided an assist by opening up a breach to the Atlantic Ocean, things started turning around in the Great South Bay. We still have a long way to go, according to environmentalists close to the matter.

Recently, a local environmental group - Friends of Bellport Bay - hit a milestone, planting 1 million oysters in the bay, the culmination of a 5-year effort. The last 50,000 oyster seeds were planted in October to hit the mark.

Friends of Bellport Bay’s interns and hundreds of local volunteers and supporters donated their time and funding to accomplish the task.  Brookhaven Town Councilman Michael Loguercio was on hand to help with the planting of the very last oysters. He thanked the group for its efforts.

“I was excited to have the opportunity today to be part of this wonderful accomplishment,” he said. “I know the Town of Brookhaven is very happy to continue working with such passionate people who are great environmental stewards.”

Oysters and hard-shelled clams provide crucial environmental benefits by filtering algae, which bloom when there is excessive nitrogen and other organic compounds in the water. The removal of these algal blooms increases both the clarity and the overall quality of the water. These shellfish, once matured, also provide shelter for other small organisms which entice larger fish to the area, promoting biodiversity in the bay.