Man pulled from water after becoming fatigued and suffering from hypothermia. 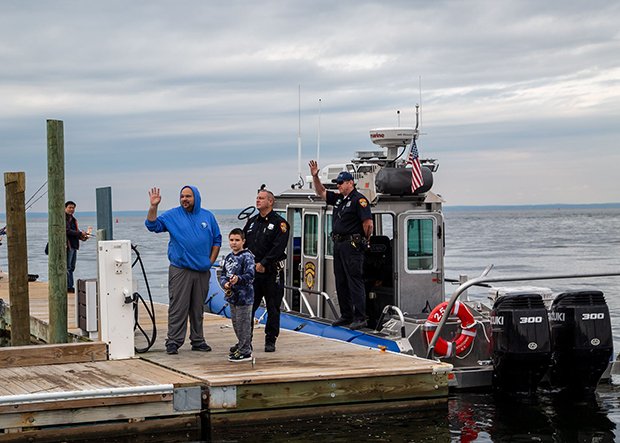 A man who fell overboard in the Nissequogue River was rescued in dramatic fashion last month when Smithtown Bay Constables and Park Rangers responded to a call along with SCPD and Kings Park Fire Department.

The call came into the Smithtown Department of Public Safety on october 22 at 5:44pm that a man was in the water clinging to a channel marker in front of the Kings Park Bluff Town Boat Ramp. Using the caller’s description and a security camera dispatchers pinpointed the victim’s location and sent help.

After they located the victim and relayed the information to responding officers, the victim lost grip of the buoy and was swept out of their camera’s view. According to a statement about the incident from the Town of Smithtown, Park Ranger Sergeant Steven Frank was able to visually locate the victim with the help of witnesses and maintained sight of him as he managed to grab a hold of another channel marker at the mouth of the river and Smithtown Bay.

As Sergeant Frank was relaying this information to Bay Constables the victim again lost his hold and was pushed by the current into Smithtown Bay. With aid from the officers on shore, the Bay Constables were able to navigate to the victim, who had now become fatigued and was suffering from hypothermia and struggling to stay afloat. The Bay Constables grabbed a hold of the victim and pulled him onboard through the dive door of the vessel where they began to administer first aid.

The 45-year-old man was brought to the Kings Park Bluff where he was treated and transported to Stony Brook University Hospital by Kings Park Fire Department Rescue.