William Floyd students had the opportunity to work with Infinitus, a modern string trio that mixes classical performance with beatboxing, story telling and audience participation. 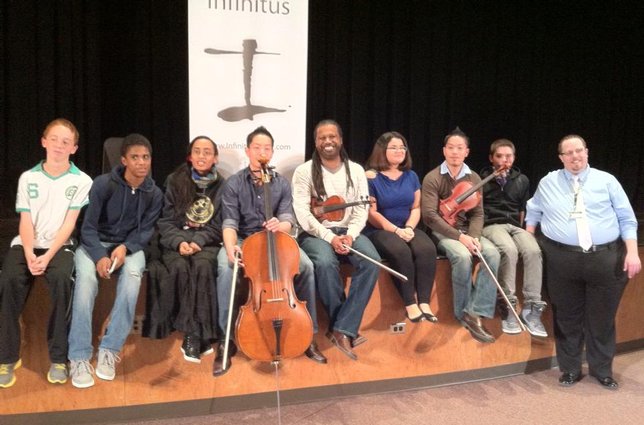 Mastic Beach, NY - November 15, 2013 - Recently, William Floyd fourth-graders from the district’s five elementary schools and its high school music students had the opportunity to work with Infinitus, a classical string trio with a modern edge. The performance was made possible through a partnership with Eastern Suffolk BOCES on a four-year grant-funded study for students to experience arts integration at the elementary level. Through this program, students have been exposed to a theatrical drama, African dance, storytelling, a ballet and classical-modern music.

Infinitus, a string trio made up of a violin, viola and cello, is known for their unique sounds and upbeat performance style. “They have taken the very traditional string trio to new places by infusing a hip, modern vibe,” said Ryan Feldscher, lead music teacher, William Floyd School District. “Through the addition of beatboxing, storytelling, audience participation and various out-of-the-box techniques, they have inspired a renewed interest in the genre.”

During the performance, the members of Infinitus answered questions about their musical journey and how they formed; then they gave some group music lessons and tips. The trio played various songs for the students including Pachelbel’s “Canon in D,” “The Eye of the Tiger,” “The Flight of the Bumble Bee,” the themes from “Scooby Doo” and “Super Mario Brothers,” and some of their own including “SpongeBob Squarepants meets Indiana Jones.”

Mr. Feldscher concluded, “By the end of the day, more than 1,100 William Floyd students engaged in a unique musical learning experience that will likely inspire them for years to come.”

Infinitus performs throughout North America and has been featured on the Canadian Broadcasting Corporation, National Public Radio, OMNI Television and in numerous publications. In 2011, they released their self-titled debut album featuring original compositions and arrangements. They are currently based in Vancouver, Canada, and perform regularly as part of the Vancouver Chamber Players Concert Series. The trio is currently on the faculty of the Thrive City String Academy and Boot Camp, the Saint James Music Academy and the Vancouver Academy of Music.