With Black Friday Sales starting earlier each year, many consumers are questioning whether or not a bargain is worth ditching dinner on Thanksgiving. 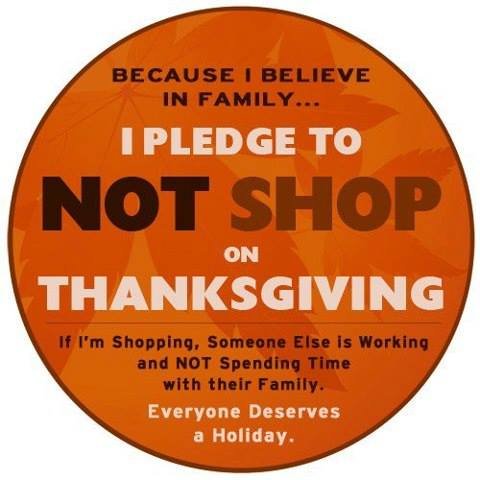 Two weeks from today, shoppers around the country will be lining up to buy discounted items from retail chains which promise blowout sales in order to drive traffic on the single biggest shopping day of the year. “Black Friday,” the day after Thanksgiving in the US, is the unofficial start to the winter holiday shopping season—a day on which customers traditionally have gathered outside of stores in the early hours of the morning and begun frenziedly tearing through bargain bins as shops opened an hour or two before the sun rose.

The name was once attributed to the idea that many stores would move out of annual operational losses (represented by red ink in common accounting practices) and into profitable returns (represented by black ink) as customers flooded the register queues to stock up on Christmas presents. Retailers have often objected to the term—occasionally offering alternative designations such as “Green Friday” which never quite catch on—out of disdain for the negative connotation the name carries. Black Friday is also the name given President John F. Kennedy’s assassination on Friday, November 22 in 1963, a massacre of eight Iranian protestors in 1978, a US financial crisis in 1869, and several other infamous events throughout history. Even the retail variation of Black Friday has seen its share of bloodshed: in 2008 a Walmart employee died in Valley Stream as he was trampled by customers who exploded into the store, and two people were shot to death at a Toys R Us in California.

Over the past two years there has been a massive push to expand Black Friday, with many stores starting earlier than ever before. As dozens of chains have chosen to open during what would normally be Thanksgiving dinner the name now hardly seems apropos—except, perhaps, to the thousands of retail employees mourning the loss of holiday time once reserved for spending in the company of friends and family.

This year, department stores such as Sears, Macy’s and Kohl’s will open at 8 PM Thanksgiving night. Best Buy and Walmart will push the envelope even further, letting customers in at 6 PM, and Kmart will be open for an incredible 41 straight hours from 6 AM Thanksgiving to 11 PM Black Friday night. Stores opening at 6 AM on Friday like Bed Bath and Beyond are fast becoming the exception, not the rule.

Retail corporations have largely pointed toward their clientele as reason for opening so much earlier than in years past. Upon announcing its expanded hours, Best Buy stated that “the key to Best Buy’s transformation is its singular focus on customer service, including giving consumers the opportunity to shop when and where they want.  Last year, millions of people made it clear that they wanted to shop on Thanksgiving evening.”

Macy’s issued a similar statement, saying that the decision to open early was made “in response to interest from customers who prefer to start their shopping early,” adding that “In a move to minimize the impact on associates, Macy’s began planning early to allow associates the time to review available shifts throughout the holiday season… and to volunteer for the shifts they prefer.”

A press release from Sears showed a similar mentality, stating that it “opened its doors for the second time on Thanksgiving Day last year and received an overwhelmingly positive response from… customers who took advantage of shopping Black Friday deals early. Stores are staffed with seasonal associates and those who have volunteered to work.”

The rosy image painted by the companies is contradicted, however, by many of the employees who will have to skip the turkey and stuffing with their loved ones in order to sell gadgets and clothes to early bird shoppers.

“Contrary to what many consumers seem to believe… retail employees do not have a choice when it comes to working on Thanksgiving, or Black Friday for that matter—it's show up, or get canned,” said one Long Island Best Buy worker who asked not to be identified.

“I'd love to be able to stay home with my family and enjoy my Thanksgiving, but year after year, Best Buy has been bumping up how early the store opens, and although I was able to enjoy a rushed meal last year with my family, that will not be the case this year,” he added. “Customers have a choice when it comes to shopping on holidays; employees do not have a choice when it comes to showing up for work.”

Ken of Deer Park, a computer technician who spent three years working for Staples and a year with the Geek Squad, offered a similar opinion. “These stores are exploiting their staff.  Having to choose between your job and spending the holidays with your family is a terrible position to be put in by the company you work for.  A lot of people are going to want to quit, but [the stores are] counting on how difficult it may be for some people to change jobs.  I think the executives that made the decision to be open on Thanksgiving are very shortsighted: while they'll certainly make more revenue, they aren't considering the impact it'll have on store morale.”

One Long Island Target employee who will be working her first holiday season in retail also asked not to be identified, but was ready to share her thoughts. “I think it is unfair to those having to go to work and minimizing their time with family and close friends. Thanksgiving is a time… where those who are unable to see relatives year round are able to come together and catch up,” she said. “There are some individuals who cannot take off for holidays.”

Small business owners are no happier about the Thanksgiving openings than the workers at larger chains. “The increased urgency to provide everything, all the time and the annual push by large retailers to cut in on the Thanksgiving holiday more and more year after year dilutes the moral fabric of our society,” said Walt Russell, the owner of Ready Riders in Dix Hills. “As a small business owner, my customers come to us because they enjoy the individual, personal attention that we give them at Ready Riders... This philosophy goes hand in hand with the ethics that respects national holidays, the importance of family and time together, and time to slow down.”

Retail workers are not the only ones objecting to the expansion of Black Friday into Thanksgiving. A new Facebook Group titled Say No to Shopping on Thanksgiving has already attracted more than 40,000 members with a simple mission statement: “Show retailers you care more for family and friends. Stay home on Thanksgiving with your family.”

Likewise, a Change.org petition titled Target - Save Thanksgiving! which asks the retailer to stay closed on Turkey Day has collected over 50,000 signatures, and another asking Best Buy to return to a 5 AM Friday opening has found around 17,000 supporters.

Another Long Island retail worker, who also asked not to be identified, cautions that these petitions may have little effect. “The thought is nice, but as long as people camp out when Walmart or Target or Best Buy tells them they’re going to save the most money, the stores will keep opening earlier and earlier,” he said. “The sales don’t even have to be that special—and a lot of them really aren’t—it’s the simple idea that spending money on Black Friday is cheaper than other sales which keeps them coming back.”

Image Courtesy of Say No to Shopping on Thanksgiving.
Video Montage below via Viral Visuals TV's YouTube Channel. This video features a variety of clips from Black Friday last year including mobs of people fighting over products, and trampling other patrons.