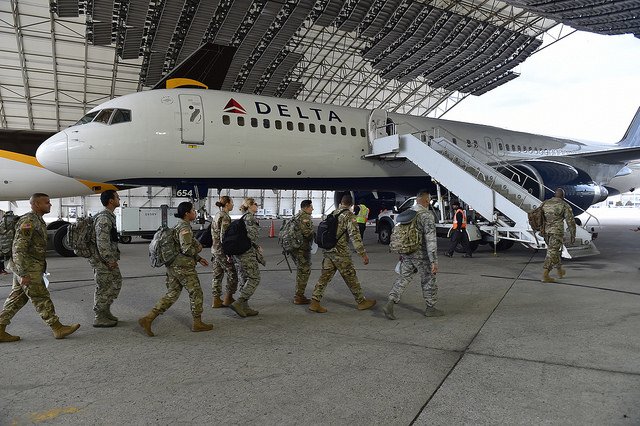 Albany, NY - November 14, 2017 - Governor Andrew M. Cuomo today announced more than 160 New York State electric public and private utility experts and nearly 100 utility vehicles have arrived in Puerto Rico to assist with the recovery of its power grid caused by severe damage from Hurricane Maria in September. The Governor also announced a deployment of resources to Puerto Rico scheduled later this week that will include 220 additional utility workers and more than 180 additional vehicles, along with special equipment, to help ongoing relief efforts.
Governor Ricardo Rosselló recently made a request to New York and other states for utility mutual aid resources in order to significantly accelerate the power restoration process on the island. As a result, the utility trade associations responded to the request to bring resources to the island, and New York's public and private utilities are the first wave to respond arriving in Puerto Rico today. The electrical crews and experts deployed from New York State include personnel from the New York Power Authority, Con Edison, AVANGRID, PSEG, National Grid and Central Hudson Gas & Electric Corp.
"New York is stepping up our efforts to provide personnel and assistance throughout the extensive recovery process underway in Puerto Rico," Governor Cuomo said. "I am proud of the hundreds of New York's utility workers and engineers who are taking a hands on role in helping repair the power grid and providing much-needed storm recovery expertise. We will continue to do all that we can to support our brothers and sisters in Puerto Rico as they work to rebuild stronger and better than before."
Crews will be working diligently to support power recovery efforts in Puerto Rico. Included in this latest deployment, and announced by the Governor on November 2, is the NYPA-led, 28-member Tactical Power Restoration team that specializes in damage assessment of the power distribution system. The New York State utility workers will coordinate directly with the Puerto Rico Electric Power Authority, in cooperation with the United States Army Corps of Engineers, to help restore the damaged electric system. The New York State deployment is complemented by 15 damage assessors who are assigned to help expedite the necessary filings for funding reimbursements with the Federal Emergency Management Agency.
The arrival of resources and personnel today follows two previous deployments of NYPA technical experts to Puerto Rico announced by Governor Cuomo on September 22 and September 29. In the immediate aftermath of Hurricane Maria, these NYPA teams embedded themselves within PREPA to assist in the necessary triage of the power grid. This included the assessment of virtually all of the island's 360 substations.
"It is critical that we provide technical support to Puerto Rico at this key time in the rebuilding process of its power grid," said Gil C. Quiniones, NYPA President and CEO. "Similar to the approach undertaken by Governor Cuomo in the aftermath of Superstorm Sandy on Long Island in 2012, Puerto Rico's electric grid needs to be made more resilient as it is restored. New York's utilities have both this kind of storm recovery experience and a strong desire to provide this crucial assistance."
Con Edison, Inc. Chairman & CEO John McAvoy said, "Our customers and employees share a strong and deep connection with Puerto Rico, and our technical personnel will provide expertise and assistance to help rebuild the island's electrical grid. We commend Governor Cuomo for organizing this team, and look forward to working cooperatively with many others to restore power."
National Grid New York President Ken Daly said, "We appreciate Governor Cuomo's continued leadership in emergency response and are proud to help restore electrical service in Puerto Rico as it recovers from the storm devastation. Mutual aid is a hallmark of the energy business and - as we remember the devastation of Superstorm Sandy to our New York customers on its 5-year anniversary -  we are ready to support Puerto Rico, just as we have more recently supported Florida and other regions."
PSEG Long Island President & Chief Operating Officer Dan Eichhorn said, "At PSEG Long Island, our employees demonstrate strong corporate citizenship and engaged community partnership every day. Supporting and helping the people of Puerto Rico further highlights this essential commitment. Nearly 70 PSEG Long Island employees volunteered for four opportunities to join NYPA and New York's other electric utilities on this important mission. It is truly heartwarming to see our employees offering to put their lives on hold in order to support this humanitarian effort."
Avangrid Networks CEO Bob Kump said, "We understand the hardship that the people of Puerto Rico have endured, and now that our team has arrived, we're looking forward to playing our part in restoring a sense of normal life. Our team is committed to putting its expertise to work to ensure that the energy grid is rebuilt to be safer, more reliable and more resilient than before."
Central Hudson Gas & Electric Corp. President & CEO Michael L. Mosher said, "Restoration of electric service is essential to the health, safety and wellbeing of the residents of Puerto Rico, and we whole heartedly support New York's efforts to offer crucial assistance to the island. We are sending 20 contractor line personnel as part of New York's contingency, as meeting the needs of customers during times of crisis can only be accomplished by working together."
For more information about the recovery and relief efforts underway in Puerto Rico, and to learn how you can assist, please visit the Governor's Empire State Relief and Recovery Effort for Puerto Rico webpage.