Service held at Veterans Plaza on the front lawn of Huntington Town Hall to honor veterans. 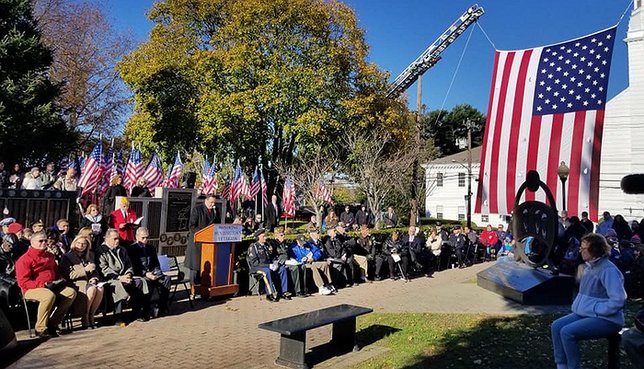 Huntington, NY - November 12, 2018 - Town of Huntington officials, the Huntington Veterans Advisory Board, Suffolk County officials, veterans’ groups, local organizations and residents gathered for a Veterans Day Ceremony on Sunday, November 11, at Veterans Plaza on the front lawn of Huntington Town Hall to honor veterans of the Town of Huntington and across our Nation.
Huntington Veterans Advisory Board Chairman Bill Ober served as master of ceremonies. The Northport High School Tour Choir performed patriotic music amidst the American flag display known as the “Field of Honor,” organized by the Kiwanis Club of Huntington.
Supervisor Chad A. Lupinacci, Veterans Advisory Board Chairman Bill Ober and Sergeant at Arms Fred Amore presented a wreath at the World War I memorial at the base of the flagpole in the center of Veterans Plaza to commemorate the Centennial of the World War I Armistice.
“We are celebrating the service of our veterans on the Centennial of the World War I Armistice, which occurred at the 11th hour of the 11th day of the 11th month of 1918, when the incessant boom of artillery abruptly went silent along the Western Front in France,” said Supervisor Chad A. Lupinacci, who went on to note that his office was contacted by the family of Walter Marshall, a service member from the Town of Huntington who served in World War I, whom the Town is in the process of adding his name to the World War I memorial plaque inside Town Hall, a request with authenticating paperwork recently reviewed and approved by the Veterans Advisory Board. “The Town Board has issued a proclamation in remembrance of the Armistice, in coordination with the World War I Centennial Commission, to promote the tolling of the bells of peace at 11:00 AM today to celebrate the Centennial.”
Councilman Mark Cuthbertson said, “On Veterans day we recognize, honor and thank the brave men and women who have served in our Nation’s armed forces. We must always remember their sacrifice in the name of our freedom not only on November 11 but also on the other 364 days of the year.”
“Today is the day we celebrate all of the men and women who served or is serving in our Armed Forces.  If it was not for these members of the military the United States of America would not be the land of the free.  I not only want to thank every man and women who is serving or has served this great nation during conflict or peace but I thank their families who sacrificed time with their love one, our military members so they can serve where they are needed near or far," stated Councilman Eugene Cook.
“Currently, about 22 million veterans live in the United States, roughly 8,500 here in the Town of Huntington. Our veterans have different backgrounds, different histories and different needs. In Huntington, we appreciate and recognize their service, and try to help them meet their needs. On Veteran’s Day it is our special privilege to pay our deepest respect and show our sincere appreciation to those who put aside their personal lives to serve our great country,” said Councilwoman Joan Cergol.
Councilman Ed Smyth stated: “It is humbling to stand amongst other veterans who live in Huntington. It was an honor and a privilege to serve in the US Marine Corps reserve. The Corps has done far more for me than I could ever do for the Corps.”
The program was sponsored by Buttercooky Bakery, 495 New York Avenue, Huntington, and Dunkin Donuts at 838 New York Avenue, Huntington and 200 East Main Street, Huntington Village.
For the 9th year in a row, The Kiwanis Club of Huntington is sponsoring a “Field of Honor” of American flags on display at Huntington Town Hall. 3’x5’ American flags are mounted on 8’ poles surrounding Veterans Plaza on the front lawn of Huntington Town Hall. Each flag has its own custom-printed gold ribbon personalized and dedicated to each veteran honoree. Flags can be purchased at BuyAFlag.org for $35. Flags were assembled in early September 2018 and will be taken down in December 2018. Net proceeds benefit veterans’ and children’s causes in Huntington.