Chris Levi and Frank Lombardi, Army Veterans, will kayak from Bridgeport, CT to Port Jefferson, NY, on 8/27 to raise money and public awareness for veterans suffering from PTSD. 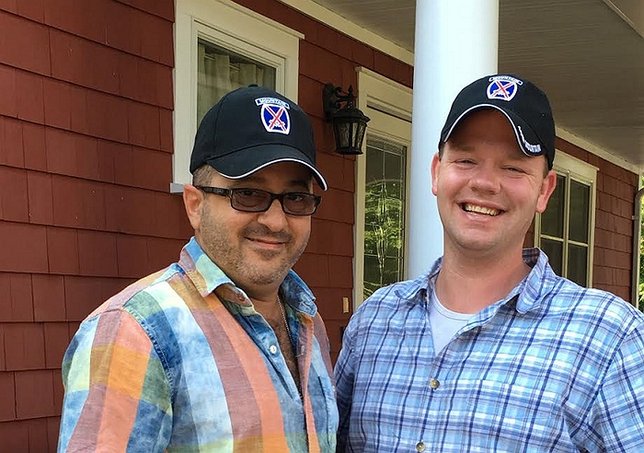 Port Jefferson, NY - August 25, 2016 - Chris Levi and Frank Lombardi, ​A​rmy Veterans from the 10th Mountain Division, one of this nation’s most revered units, will kayak from Bridgeport, Connecticut to Port Jefferson, NY, on August 27th to raise money and public awareness for five regional and national non-profit organizations that support military Veterans.

With a goal to raise awareness for fellow Veterans who need help, Lombardi and Levi will be kayaking 22 miles in a single day to provide hope for Veterans suffering from Post-Traumatic Stress Disorder (PTSD).

PTSD is a mental health condition triggered by a terrifying event — either experiencing it or witnessing it. Symptoms can include flashbacks, nightmares and severe anxiety, as well as uncontrollable thoughts about the event.

Lombardi is horrified by the statistic that twenty-two War Veterans commit suicide each day, many owing to the mental stress from PTSD. “If we can give hope to just one Veteran and prevent them from taking their own lives, we will consider the trip a huge success!”

“The 10th Mountain Division’s motto of ‘Climb to Glory’ represents hope for all Veterans who are suffering that they can climb out of the darkness and rise to achieve great things!” said Lombardi.

#22Kill is a global movement created by Veterans with a mission to honor those who serve or have served and raise awareness about veteran suicide and mental health issues.

Lombardi and Levi will be paddling for PTSD awareness and for Island Harvest’s Operation Hope, whose mission is to bring much needed food and support to fellow servicemen and women and families of active military members.

Alex Rohman, partner of Time Capital, is an active supporter of the War Writers Campaign. He is sponsoring a kayak in the August 27 event and approached the two Mountaineers with the initial idea. “I called Chris and Frank to see if they would be interested in supporting the trip and they immediately agreed,” Rohman said. “Within one day, they wanted to do more to not only support the War Writers Campaign, but wanted to expand the level of awareness to other organizations as well.”

“Both Chris and Frank represent unconditional support for all Veterans and have dedicated their lives to help those who are less fortunate,” explained Rohman. “They are true American heroes whose strength and perseverance can provide hope for the many Veterans who need support to pick themselves up and show the world that they can do amazing things!”

Levi added, “We want to show our fellow Veterans that there is hope out there and with the right support, they can truly ‘Climb to Glory.’”

Levi knows something about adversity. On St. Patrick’s Day 2008, he was leading a convoy in Iraq when his Humvee was hit with rockets and IED’s. As a result of the attack, Levi sustained many life-threatening injuries, including the loss of both legs and significant damage to his right hand and arm. He spent many months and years in hospitals and after numerous surgeries and difficult rehabilitation his spirit and will to survive persevered.

Lombardi has also fought through adversity and has dedicated his life to helping others. He currently serves as an Executive for the Independent Group Home Living Program (IGHL), based in Manorville, NY, whose mission is to provide lifetime alternatives for children and adults who are intellectually-disabled. Lombardi also serves on the National Advisory Board of World T.E.A.M Sports as well as The Social Enterprise Alliance. A supporter of Operation Hope, Lombardi noted of the upcoming kayak journey that “Chris and I are honored to help raise awareness for great organizations that support Veterans who need help. Hopefully, our small gesture will give someone hope and help them ‘Climb to Glory!’”