Governor Andrew M. Cuomo today announced that he signed legislation to ensure that the flags lowered to half-staff at the State Capitol in honor of a fallen soldier are presented to the loved ones of ... 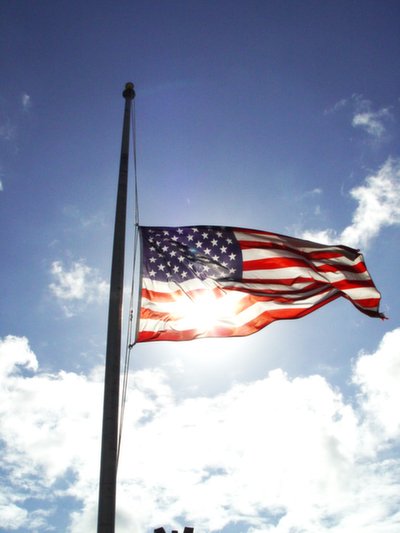 Albany, NY - November 10, 2013 - Governor Andrew M. Cuomo today announced that he signed legislation to ensure that the flags lowered to half-staff at the State Capitol in honor of a fallen soldier are presented to the loved ones of the deceased.

"As we honor the service of all those who served this Veteran's Day, I am proud to sign this legislation to provide this lasting symbol to the families of those who made the ultimate sacrifice to protect our freedom," Governor Cuomo said. "New York State commemorates the fallen by lowering flags flown above the State Capitol to half-staff, and by giving these flags to the loved ones of our heroes we will help further honor their memory and courage. I thank the bill sponsors for their work on this important legislation."

Under the new law (S.5805/A.8039), the Division of Military and Naval Affairs will create the “Lt. Colonel Todd Clark Memorial Flag Presentation Program,” where if a Governor orders the U.S. and N.Y. flags to be lowered to half-staff, in honor of a member of the armed services, the family of the fallen service member will be given the flag without cost. Lt. Colonel Clark, a native of Guilderland, was a 17-year veteran of the U.S. Army when he was killed on June 8, 2013, in Afghanistan. The new law takes effect immediately.

Senator Hugh T. Farley said "This bill represents a small token of New York State's appreciation for the service and sacrifices made by our military personnel and their families. I was pleased to work with the Clark family, who brought this matter to my attention, and I thank Governor Cuomo for his support of this measure of recognition for our fallen soldiers."

Assembly Member Patricia Fahy said, “It is a true privilege to have co-sponsored the creation of this flag program in honor of the ultimate sacrifice of Lieutenant Colonel Clark, and I am grateful to Governor Cuomo for his support of this bill. This is a small expression of our enduring gratitude to the families of fallen veterans such as Lt. Colonel Clark and all of those who have paid the ultimate sacrifice in service to our great country.”

Davenport Veterans of Foreign Wars Memorial Highway (S.3765-A / A.5579-A): This new law will designate State Route 23 in Delaware County from the eastern to western boundaries of the Town of Davenport as the ”Davenport Veterans of Foreign Wars Memorial Highway.” The designation will memorialize the recently deceased members of the VFW Post #487 who served in Korea and fought in WW II, as well as the many veterans residing in the Town of Davenport.

Genesee and Orleans Veterans’ Memorial Highway (S.3795-A / A.4850-A): This new law will designate a portion of State Route 98, starting at the northern end in the Town of Carlton, Orleans County, and terminating at the southern end in the Town of Alexander, Genesee County, as the “Genesee and Orleans Veterans’ Memorial Highway.” Designating this portion of Route 98 is a fitting tribute to the service men and women who have selflessly defended the lives of millions of Americans.

Hancock Veterans Memorial Highway (S.4360-B / A.6823-B): This new law will designate a portion of State Route 97 from the border of the Town of Hancock to the Delaware/Sullivan County line as the “Hancock Veterans Memorial Highway.” The Town of Hancock has lost two service men in the Iraq War, as well as other service men in previous wars and conflicts. This bill would honor their memory.