In nine straight victories this season, the Colonials have outscored their opponents 387-64. 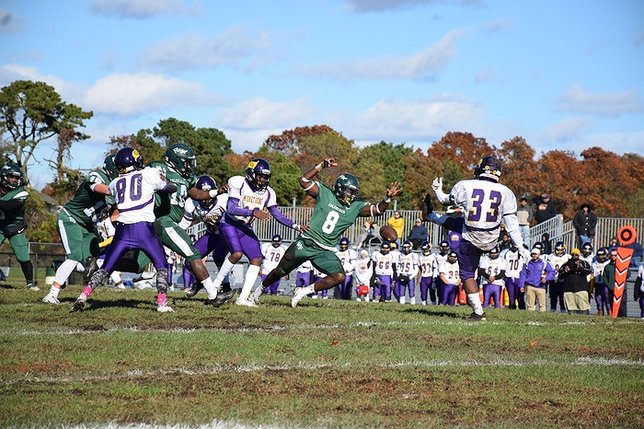 Defensive lineman Keith Winfrey #8 goes for the block in a 42-0 victory over Central Islip in the quarterfinals.

Mastic Beach, NY - November 8, 2018 - Coach Paul Longo and the William Floyd Colonials are moving on to the semifinals of the Division I playoffs following their 42-0 shutout victory over the Central Islip Musketeers on Saturday, November 3. The Colonials are set to host Sachem East on Saturday, November 10 at 1 pm at the Lincoln Avenue Sports Complex in Mastic Beach, a team they already knocked off earlier this season by a score of 41-12. In nine straight victories this season, the Colonials have outscored their opponents 387-64. With a victory this week, the Colonials will make it back to their third consecutive Suffolk County Championship game at Stony Brook University on November 17.
In the quarterfinal matchup against Central Islip, the Colonial offense torched the Musketeer defense with multiple big-play touchdowns, including two touchdown passes from Mack Driver (67 yards to Devin Brown/23 yards to Jordan Clinton) and an 83-yard touchdown run from Zion Wellington. Driver also added a 73-yard touchdown run of his own along with a pair or rushing touchdowns from Tyshawn Lopez to round out the scoring (all in the first half). The defense dominated their side of the ball as well, tallying 14 total tackles for loss. P.K. Kite, Keith Winfrey and Mike Tarry combined for two sacks and Andrew Minelli forced a fumble which was recovered by Tyshawn Lopez. Paul Paniccia was perfect on extra points with six, and added two touchbacks. Mack Driver was also recognized in the November 4 edition of Newsday as a “Grid-Iron Great” for this week’s performance, the first Colonial to be recognized this season.
For the semifinal matchup, Section XI charges an admission fee of $6 per ticket. Tickets will be available at the gate. However, Section XI recommends purchasing tickets in advance for the “Division I Semifinal” at this link or at the Go Fan – High School app (if using the Go Fan app, please search for Section XI). Please note there is a $1.30 convenience fee charged by Go Fan for use of its services.
The Colonials currently own five Long Island Championships (2005, 2006, 2007, 2011 and 2012) and 10 Suffolk County Championships (2001, 2003, 2005, 2006, 2007, 2009, 2010, 2011, 2012 and 2016).