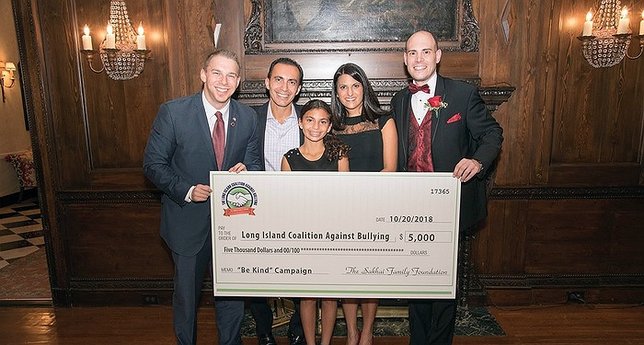 Syosset, NY - November 5, 2018 - Nassau County Legislator Joshua A. Lafazan (Woodbury) joined the Long Island Coalition Against Bullying (LICAB) to celebrate their achievements in the fight against bullying during the organization’s fifth annual gala on Saturday, Oct. 20.
During the festivities at the Woodside Club in Syosset, Legislator Lafazan presented a Nassau County Citation to LICAB Executive Director Joseph Salamone in recognition of his critical and life-saving work to eradicate the scourge of bullying in Long Island’s schools. LICAB and Salamone were key partners in Legislator Lafazan’s successful push to create www.NassauStopBullying.org, the County’s new bullying prevention resource website.
For more information, please contact Danny Schrafel at 516-571-4214 or dschrafel@nassaucountyny.gov.
In addition, Legislator Lafazan congratulated young anti-bullying advocate Shayna Sakhai for raising $5,000 in support of LICAB as part of her Bat Mitzvah project - funds Sakhai and her parents formally presented to Salamone and LICAB during the gala.
“Joseph Salamone and his team at the Long Island Coalition Against Bullying have been outstanding advocates and partners in our shared mission to ensure our schools are always safe havens for learning, growth and exploration,” Legislator Lafazan said. “I am proud to stand with advocates like Joe and Shayna as they continue to make Long Island a kinder place for everyone.”