Brooks: "The Chamber’s honorees tonight, as well as its officers, board of directors, members and supporters work diligently year-round." 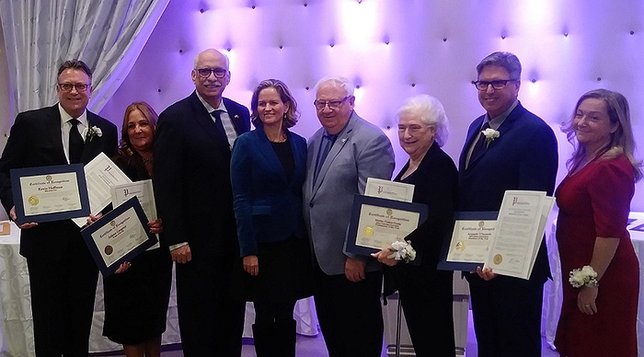 Merrick, NY - January 25, 2017 - Senator John E. Brooks joined the Merrick Chamber of Commerce as they held their 83rd Annual Awards and Installation Dinner Wednesday night, January 24th at Chateau Briand in Carle Place. Senator Brooks presented proclamations to Kevin Hofmann, Man of the Year; Arlene Gregory, Woman of the Year; Armando D’ Accordo, Merchant of the Year; and Marian Fraker Gutin, Professional of the Year.
Senator Brooks said, “The Merrick Chamber of Commerce’s slogan is, ‘Welcome to Merrick… a great place to live, work and shop!’ and the Chamber’s honorees tonight, as well as its officers, board of directors, members and supporters work diligently year-round to make sure their slogan is more than a motto - it’s an accomplishment! Congratulations to all.”
John E. Brooks is the New York State Senator for the 8th District, representing portions of Nassau and Suffolk Counties along the South Shore of Long Island.