A Look at The Democratic, Republican, and Green Party Candidates Running for Nassau County Executive on November 7 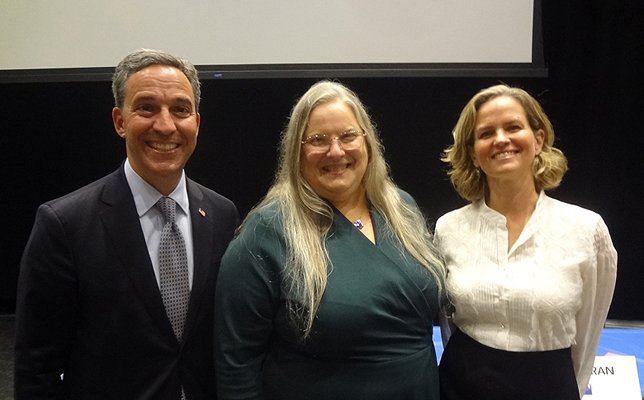 Nassau County, NY - November 3, 2017 - With the news that Nassau County Executive Edward Mangano – currently preparing for a large-scale legal battle after being indicted on Federal corruption charges in October of 2016 – had failed to register for re-election as either a Republican or Independent by established deadlines, the field was left wide open for a newcomer to lay claim to the title of Nassau County’s highest office come Election Day on November 7.
Vying for the seat of Nassau Executive this November are Democrat Laura Curran, a former newspaper reporter and current District 5 Nassau County Legislator; Republican Jack Martins, former State Senator and Mayor of Mineola; and Green Party member Cassandra Lems, who previously attempted an unsuccessful run for the New York State Senate in 2014.
Since winning their individual primaries and becoming the lead candidates for their respective parties, these three individuals have participated in several public debates and Q&A sessions in order to win over any potential voters who may be sitting on the fence about their choices on the ballot. 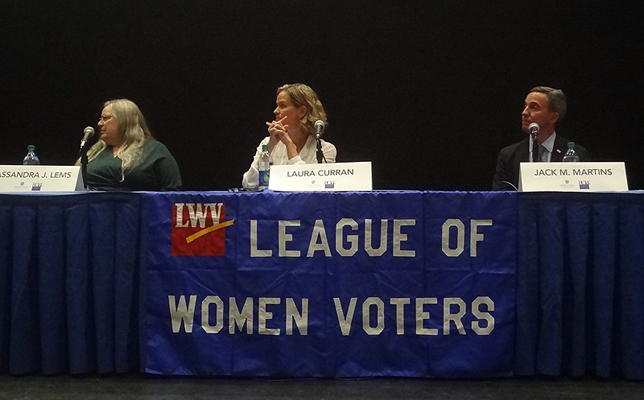 (L to R): Cassandra Lems, Laura Curran, and Jack Martins at a public debate at Hofstra University. Photo Credit: Chris Boyle
Let’s take a look at the three candidates for Nassau County Executive who will be on the ballot this November 7 - just next week - so that voters can make an informed decision come Election Day, which is right around the corner.
Joaquim "Jack" M. Martins is an American attorney and a Republican politician. He was first elected to the New York State Senate – representing the 7th District – in 2010, and continued to serve in that capacity until December 31, 2016. He also made an unsuccessful attempt to run for New York’s 3rd Congressional District in 2016 against Democratic candidate Thomas Suozzi in 2016. Prior to his experience in state government, Martins served as Mayor of Mineola from 2003 to his election to the Senate in 2010.
Laura Curran, in her second term as a Nassau County Legislator, was first elected to her post in January of 2014, serving the 5th Legislative District, which includes most of Baldwin, all of South Hempstead, a major portion of Freeport, and parts of Rockville Centre, Merrick, and Oceanside. Curran, a Democrat, serves on several legislative committees, including Finance, Public Safety, Public Works, and Minority Affairs. Curran is also an active member of her local school board.
Cassandra Lems is a member of the Green Party of Nassau County, an organization that supports and fights for environmental issues, and has stated publically that the county has been controlled by the two main parties - Republicans and Democrats - for far too long, and that a change is in order.
Martins, Curran, and Lem all participated in a recent public debate hosted by the League of Women Voters and held at Hofstra University’s Monroe Lecture Center, where all three provided opening statements and fielded questions from the audience. Martins said in his opening statement  that, if elected to the office of County Executive, he will take every opportunity to overhaul and correct the numerous problems he said have been plaguing residents for a number of years under the leadership of Edward Mangano.
“I'm looking forward to addressing some of the issues facing Nassau County. People are concerned about finances here in the county…high taxes, crumbling infrastructure, protecting the environment. Issues that affect the future of our county, because we all want the same thing,” Martins said. “We live here because we choose to live here, and we want our children to have the same opportunities that we have. So whoever is elected in November, those challenges are going to be here, and I feel that the experience I have as someone that has tackled some of these same issues as a mayor and as a state senator enables me to serve our county.” 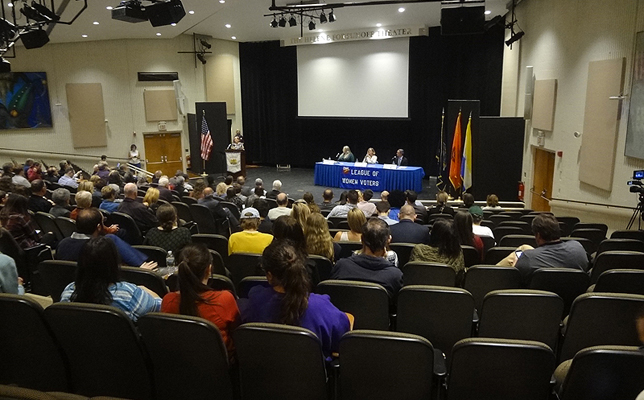 Cassandra Lems, Laura Curran, and Jack Martins at a public debate at Hofstra University. Photo Credit: Chris Boyle
“As a school board member, I love dealing with budgets and fiscal policies and being able to engage with my community. It really sparked my interest to step up and serve my community in a bigger way as a Nassau County Legislature,” Curran said during her opening statement. “As a legislator for almost the past four years, I'm very proud to have a reputation as someone who works across party lines to get things done. For the past four years I've had a front-row seat to the corruption, mismanagement, and dysfunction, and in talking to people in different communities there's a deep feeling of mistrust. The system is broken, and I'm running for County Executive because I believe we deserve a government that lives up to us.”
“The League of Women Voters is one of the very few organizations that always invites all of the candidates…even third-party candidates. Green Party candidates are routinely ignored by the press and excluded from candidate forums,” noted Lems, taking a more combative stance with her opening statement than her two political rivals. “Elections are all about money, and my competitors say that the system isn't working, but what they don't seem to realize is that that they are part of that system. I'm not accusing my opponents of corruption, but they are part of a system that corrupts. Things are not going to improve until we make a radical change, and I had some fresh new ideas.”
Curran took the first question from the audience, addressing how she would go about restoring the public’s trust in their government after numerous high-profile political and economic scandals in recent months and years.
“If we want to create a vision of how we grow, and how we do true economic development, we have got to be trustworthy,” she said. “The other issue I think that is incredibly important is getting our finances in order. One way to do that is to make sure that we grow the tax base. 40 percent of the revenue for the county comes from sales tax, so we need to do everything we can to make businesses viable, and to attract more business, and to create more transit-oriented development and walkable downtown areas.”
Martins agreed, saying that fighting corruption and repairing the local economy are clearly bipartisan issues, and that all political parties should band together to combat them.
“The primary issue is restoring public trust in government. Elected official after elected official has been arrested and indicted...both sides have a lot to be ashamed of when it comes to public corruption in Nassau County,” he said. “Fixing the county's finances is certainly important as well...to fix our problems and not leave them for our children. That's our responsibility and my commitment if elected.”
Lems departed from her opponents in her response to the idea that corruption and economic issues are the greatest problems facing Nassau County, instead insisting that threats to the environment were far more dire as far as their long-term consequences went.
“I think the candidates think that corruption is our number one problem, and while that's very important, I think the taxpayers think the most important problem is the high cost of living, the taxes, and balancing the budget,” she said. “But I personally think the most important issue that we need to keep in mind is to protect our island, to protect our planet, from global warming and the intrusion of chemicals. We need to stop dumping chemicals and fertilizers into our oceans and bays...we're going to kill our planet, and I think it's very short-sighted just to focus on corruption and balancing the budget.”