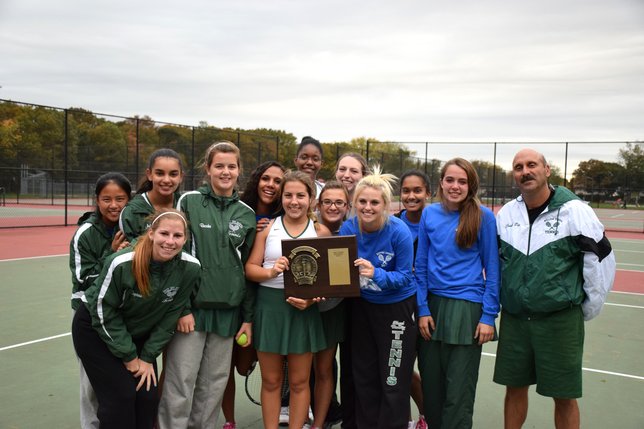 St. James, NY - October 30, 2014 - In a rematch from last year’s finals, the William Floyd Colonials varsity tennis team (No. 2 seed) defied the odds and defeated the favored Half Hollow Hills East (HHHE) Thunderbirds to win their first Suffolk County Championship by a score of 4-3 at Smithtown East High School in St. James. HHHE was ranked as the top seeded team throughout the year who was going for their fourth straight Suffolk County Championship.

The finals, played over two days, were tied 3-3 after the first day with the deciding singles match being suspended due to darkness midway through the third set. The match, featuring Christina Cali for William Floyd playing against Gabrielle Raziel, continued with Cali trailing by a score of 2-3. When play resumed, Cali won the first two games to go up 4-3 and then battled on to win 6-4.

“I’m so proud of the girls for this tremendous accomplishment,” said Head Coach Dave Pia. “All their hard work and dedication has made them champions!”

The team finished with a 19 -1 overall record and advanced to the finals with wins over Harborfields, Smithtown East and Ward Melville. They also won the League and Division titles for the third straight year.

Click here to see additional photos from the final match and championship celebration.