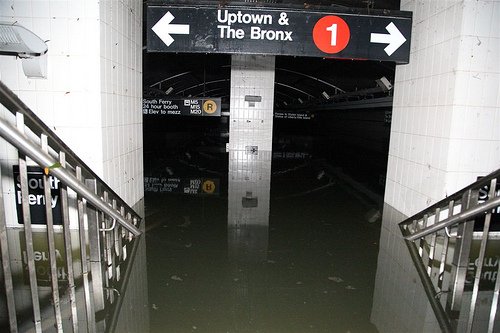 Albany, NY - October 29, 2013 - Governor Andrew M. Cuomo and MTA Chairman and CEO Thomas F. Prendergast, accompanied by U.S. Department of Housing and Urban Development Secretary Shaun Donovan and other officials, today toured Lower Manhattan to see firsthand some of the emerging technologies the Metropolitan Transportation Authority (MTA) is considering as part of the agency’s comprehensive hardening and resiliency efforts to protect the system from future storms. The MTA has also been researching and investigating existing flood mitigation and resiliency systems used worldwide for possible adaption in New York.

The MTA is designing solutions to fully prevent water incursion at the approximately 600 entry points in Lower Manhattan as well as vulnerable vent plants and openings in other flood prone areas. MTA New York City Transit is also analyzing all underground tube locations to ensure that critical points where water can enter the system are protected.

“The devastation from Superstorm Sandy affected millions of commuters who rely on the MTA system every day, and while the quick restoration of service was an amazing feat, the real long-term accomplishment will be to harden the network against future storms,” Governor Cuomo said. “Today, we saw firsthand some of the cutting edge and innovative technologies that the MTA is exploring to prevent the transit system from flooding, as part of many projects that are underway to better protect our trains, subways, buses, bridges and tunnels during extreme weather. One year after Sandy, I am pleased to see MTA’s progress in making its network stronger and more resilient, so we can keep New Yorkers moving in the future.”

“The challenge after Sandy was to quickly establish effective protection against storm surges, and the MTA is meeting that challenge head-on by quickly deploying methods that we can achieve with our existing forces,” Chairman Prendergast said. “At the same time, under the leadership of Governor Cuomo, we are piloting various alternative strategies to see if they will work within the diverse confines of our system. We are building back better, stronger, and more resilient.”

The Governor and officials viewed a prototype entrance cover at the Whitehall St. subway station, developed by RSA Protective Technologies to protect at least 13 vulnerable stairwells in Lower Manhattan. This stairway cover will be able to be rapidly installed without the need of mechanized equipment.

The tour also brought Governor Cuomo and officials into the new South Ferry subway station, closed since Superstorm Sandy filled the entire station with over 14 million gallons of corrosive salt water, to view a tunnel plug under development by ILC Dover, a Department of Homeland Security vendor and supplier to NASA, to protect subway portals where grade level tracks transition to underground subways. The tunnel plug demonstrated inside the station, though not designed for use inside the subway system, is an example of the innovative design ILC is developing for the 207th Street portal in Inwood that saw flooding during Sandy. At 207 Street, early development of a “Tensioned Curtain” (which is a derivative of the plug technology) is underway to meet that challenge. A similar prototype is being developed for a typical street stairwell entry. If successfully prototyped and tested, the MTA hopes the technology could be applied to portals and stairwell locations throughout the system.

To view a photo of the reopened old South Ferry subway station after Sandy, go to:
http://www.flickr.com/photos/mtaphotos/8620172538/

Another vendor, FloodBreak, is producing a permanently implantable device beneath sidewalk ventilation gratings that can be immediately and easily closed, sealing the vent from flood waters. A prototype is in place under a grating on Rector Street. If successful, several hundred units may be used in gratings at the most vulnerable locations in the City.

Across the MTA, more than 70 projects are in design worth approximately $4.5 billion. Five projects totaling $75 million are in procurement and 16 projects, worth $575 million, are already in construction. At MTA New York City Transit, design has begun for repairs to six subway tubes including work on signals, pump rooms, power and communications, tunnel lighting, and ducts. Over 1 million riders use these six tubes on the average weekday. In addition to design of signal and other systems, New York City Transit is building two new pump trains that will reduce the time needed to pump water out of the subway system.

A full-scale redesign for permanent repairs to the new South Ferry station is ongoing, and designs are underway for repairs and protective measures to the Clifton Shop and St. George Terminal of the Staten Island Railway which were also heavily damaged during Sandy. This work is part of New York City Transit’s effort to identify the best way to protect vulnerable subway yards. Measures will include barriers and improved drainage and pumping.

New York City Transit projects in construction include the Montague R tubes between Brooklyn and Manhattan, closed for 14 months while damaged ventilation, lighting, pump control, and signal systems are replaced and hardened. Intense work inside the Greenpoint G tubes to replace damaged components between Brooklyn and Queens began in July. Work is ongoing during weekend shutdowns, when substitute bus service is provided.

Extensive work is underway to protect and harden the MTA’s railroads. Contracts have been awarded to repair and elevate two of the three damaged substations along the Long Island Rail Road’s Long Beach Branch. Design is underway for resiliency work that will protect Penn Station, which is likely to include flood barriers at the tunnel portals, perimeter protection for the West Side Yard, and pump and drainage improvements.

Metro-North Railroad has begun design work for new power and communications components along 30 miles of the Hudson Line and in other flood-prone areas. Equipment will be elevated or relocated where possible.

MTA Bridges and Tunnels is developing designs to make comprehensive repairs to its vehicular tunnels, including work on electrical, mechanical, lighting, and communications systems, traffic control devices, structural repairs, panels, and ventilation buildings. Water-inflated cofferdams are a storm emergency response tool under consideration intended to protect the portals of the tunnel from severe storm surges. Each water-filled tube is 85 feet long, and rises to four feet high when inflated with water fed by fire hoses.

At the Hugh L. Carey Tunnel, the open railing/picket fence at Morris Street, where floodwaters entered during Sandy, is now secured with a steel-braced temporary wall system that will remain in place until a permanent retaining wall is constructed. Ongoing mitigation work will include the permanent extension and raising of the retaining walls at tunnel plazas, installation of permanent flood walls and flood gates, additional emergency generators, and relocation of electrical and communications equipment to higher elevations.