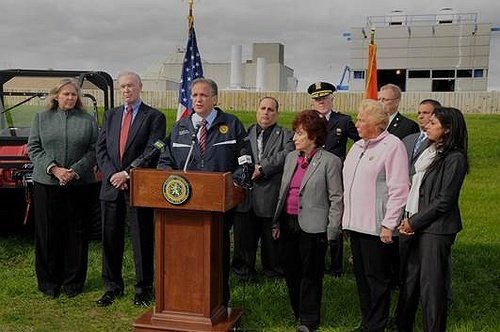 “Nassau County was one of the hardest hit areas by Superstorm Sandy and we have made great progress in our recovery efforts. We continue to rebuild our infrastructure bigger and stronger than ever before,” said County Executive Mangano. “Bay Park is one the most ambitious post-Superstorm Sandy infrastructure and mitigation projects on the East Coast and perhaps the best example of strengthening infrastructure against future storms while including smart rebuilding strategies that benefit residents and ensure the aesthetics needed to preserve the quality of our community.”

Bay Park Wastewater Treatment Plant and Sewage Pumping Stations:
Perhaps the largest Superstorm Sandy recovery project in the nation, progress continues daily at the Bay Park Wastewater Treatment Plant in East Rockaway which serves 40% (550,000 residents) of Nassau County’s population. During the storm, approximately 50 structures, numerous mechanical systems and operating equipment were damaged. The plant’s electrical distribution and power generation systems were also rendered inoperable for 57 hours due to flood waters inundating electrical conduits via the bottom of the substation, overland flooding and through a surcharged drain system. The loss of power to the plant caused partially treated sewage to be discharged into East Rockaway Channel, which opens into Hewlett Bay, Hempstead Bay and ultimately the Atlantic Ocean.

Floodwaters caused the total failure of the Bay Park Wastewater Treatment Plant. In order to put the plant back in service, it was necessary to install a temporary sludge dewatering system. It is anticipated that this operation will continue until the completion of the repairs to the plant. The plant had been operating in compliance with its NYS Department of Environmental Conservation State Pollution Elimination System (SPDES) permit for more than a year thanks to initiatives put forth by the Legislature and administration.

Superstorm Sandy also damaged 41 of the 57 pumping stations throughout Nassau County, where localized flooding was in excess of 10ft in buildings causing many pieces of process equipment to be submerged along with a variety of electrical equipment. Inoperability of the Pump Stations resulted in the leakage of storm water mixed with sewage via ruptured pipes, surcharging at manholes and in residential and commercial basement drains. Immediate efforts by the County resulted in 34 of the 41 damaged Pump Stations being repaired and operational within less than a month of Superstorm Sandy’s landfall. Nassau County spent $38 million in emergency response services to restore these operations.

• complete re-construction and upgrade of the East Park, which is now open to the public;

• completion of approximately 80% of the Flood Protection Berm & Walls protecting against a 500-year flood event or tidal surge of up to 18 feet;

• rehabilitation of final settling tanks is near completion; and

Together, these projects will reduce the risk to the plant during and following future storm events, subsequently protecting public health and safety and community welfare. Each day, approximately 200 construction workers and 55 program and construction managers are on-site.

Barnes Avenue & Third Place in Baldwin:
During Superstorm Sandy, storm surge overflowed into the sanitary sewer system stopping and reversing the flow of raw sewage at 3rd Place and Barnes Avenue. The sewage and storm surge heavily damaged area residencies and roadways. Initial funding in the form of a $4.2 million hazard mitigation grant was received from FEMA for damages sustained at the Barnes Avenue interceptor. A $28.6 million project will also mitigate occurrences in the future. The target area of this project, which includes the Villages of Baldwin and Hempstead, serves 23,715 people.

The construction contract for a new wastewater pumping station and force main which will serve to lessen flow through the Barnes Avenue/Third Place interceptor sewer was approved by the County Legislature on October 19th. It is anticipated that the construction will begin in January 2016 and be complete within 15 months.

West Shore Road in Bayville:
Repair of West Shore Road and its seawall is the largest post-Superstorm Sandy road repair and resiliency project in Nassau County. To date, Phases I and II have been complete and more than 5,000 linear feet of seawall and roadway – which collapsed as a result of Superstorm Sandy - has been reconstructed. Phase III is currently in the design stage and work will go out to bid in early 2016. Additionally, the County is investigating the condition of the Bayville Bridge which requires repairs.

Bayville and Long Beach Bridges:
During Superstorm Sandy the emergency generators for the Bayville Bridge, as well as the Long Beach Bridge, were flooded and inoperable hindering navigation and vehicular traffic. Nassau County has constructed a new emergency generator that is located above the flood elevation to mitigate against the loss of operation of the bridges after large storm events.

Emergency Response Vehicles:
Saltwater from Superstorm Sandy resulted in damage to emergency response vehicles. While the vehicles were able to continue working in the flood waters, their long-term survivability was compromised. Accordingly, the Office of Emergency Management (OEM) has purchased 20 ultra-high axle vehicles, through military surplus, to assist the fire service and first responders in flooded areas. OEM has also purchased all-terrain vehicles to assist first responders in hard to reach places. In fact, OEM continues to take many steps to prepare for and create a more resilient Nassau County. OEM has strategically stationed emergency supplies throughout the County, increased generator supply and communication capabilities, increased warehouse space for the stockpiling of disaster relief supplies and enhanced the level of training for all county agencies, Cities, Towns, and Villages;

Superstorm Sandy also resulted in damage to County hazmat trucks used as emergency rescue vehicles. In the performance of this work they were subjected to saltwater flooding. The County has taken delivery of one vehicle very similar in size and function to the original and has recently received bids for 4 smaller vehicles that will address the same function.

Additionally, a total of 15 Police Department vehicles were damaged beyond repair due to storm surge flooding. FEMA has allocated funds for the replacement of these vehicles.

NCPD Marine Bureau:
The Nassau County Police Department Marine Bureau - located adjacent to the Bay Park Wastewater Treatment Plant - is a facility where all major patrol vessel repair work is conducted. The facility covers 15,000 square feet of space, and is located on 4 acres adjoining the waterfront. As a result of Superstorm Sandy, the fueling pumps were damaged and could not provide much needed fuel and services to the NCPD fleet. An upcoming project to storm-harden the fueling station and the administration building will permit the NCPD to operate more efficiently especially during storm events. The Marine Bureau project will be constructed in the spring of 2016.

Traffic Measures:
To protect the health, safety and welfare of residents during future storms, the following Traffic Related Equipment was purchased:

• 50 Portable Traffic Signal Trailers were purchased using Capital Funding in the amount of $1.5 million. These solar powered trailers will be deployed whenever traffic signals are damaged for an extended period of time. These portable signal trailers can also be deployed for temporary traffic control or to assist in evacuation of coastal areas.

• 8 Portable Message Sign Trailers were purchased using Capital Funding in the amount of $120,000. These solar powered trailers will be deployed to assist in evacuations. Motorists will receive information directly from the Traffic Management Center via wireless link to the sign trailers.

• Emergency Generator Trailers were purchased using Capital Funding in the amount of $240,000. These cargo trailers will be utilized to power traffic signals at major intersections in the event of a wide area power outage.

• 6 Traffic Camera Trailers were purchased using Capital Funding in the amount of $150,000. These solar powered trailers will allow Operators at the Traffic Management Center to view real time traffic conditions at locations as needed during storms or evacuations.

• 2 Highway Advisory Radio Trailers were purchased using Capital Funding in the amount of $80,000. These solar powered trailers will allow Operators at the Traffic Management Center to transmit real-time traffic information to motorists using the AM radio system. Motorists would tune to a preset AM radio frequency and be able to make informed decisions on their travel route. These trailers will be especially beneficial during evacuations of coastal areas, but will also prove helpful following the storm in guiding people back into damaged areas.

• 2 Incident Management Response Trailers were purchased using Capital Funding in the amount of $80,000. Filled with roadway safety devices such as cones, barricades, and portable signs, these cargo trailers will be used to help detour traffic in an organized manor in the event of planned or unplanned closures of roadways.

The Signal Management System (SMS) Upgrade is a proposed modification to the Existing SMS system in the amount of $100,000. This upgrade to the County’s existing traffic signal infrastructure database will add a “Disaster” module that will allow field personnel to triage and document equipment damage in real time using iPads. This system will allow for a more efficient damage information collection system and ensure that information collected conforms to Federal Guidelines. Real time triage information will allow Traffic staff to direct resources on an emergency basis establishing an order of importance based upon information received.

A contract amendment and request for additional funding will be considered by the Legislature in November. Once approved, the design firm will begin work utilizing previously encumbered funds.

Superstorm Sandy destroyed Bay Park in East Rockaway. Reconstruction is now complete. The berm on the main road - Marjorie Lane - was shifted closer to the new berm, allowing for new turf baseball fields to be constructed and providing for better access to the bulkhead along East Rockaway Channel. The work raised the field level by three feet and includes new drainage and storm water infrastructure, including a bio-filtration process to allow storm water to slowly infiltrate the ground and remove additional pollutants before discharge into the Channel. Construction commenced in June 2014.

Nassau County lost the pumps that operate the North Woodmere Park and Wantagh Park pools. The County is hardening the facilities to prevent the pool pumps from being flooded and providing an emergency generator to each of the facilities, thus mitigating potential future damages by ensuring the pumps remain operational.

Superstorm Sandy destroyed the Yacht Club and Community Center at Wantagh Park. This project encompasses a wide scope of work, to include demolishing the existing yacht club building which was compromised by storm surge. In its place, a hardened pre-cast ‘lighthouse’ structure will be installed which will house all existing utilities, and also add cosmetic appeal. A new addition is also being built at the Administration Building to replace the facility lost at Cow Meadow Park. A glass façade will update the look of the facility and it will be used for community affairs. The project is scheduled for completion in 2016.

Irrigation pumps at Bay Park and Woodmere Golf Courses were also flooded and damaged from Superstorm Sandy. These pumps and the electrical systems were installed in a manner which provides mitigation from any future damages since they were raised above the flood elevation.

All new fence and netting has been installed on the batting cages at Eisenhower Park that were damaged by the storm.