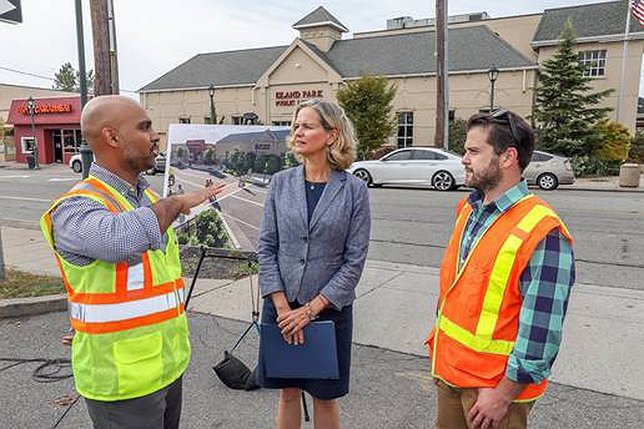 Nassau County Executive Laura Curran and officials from the Governor’s Office of Storm Recovery announced the start of an innovative hybrid downtown revitalization and flood prevention project on the 9th anniversary week of Superstorm Sandy.
“We are constantly striving to improve downtowns and enhance safety in low-lying areas of the County,” said Nassau County Executive Laura Curran. “This project accomplishes both. We’re thankful to Governor Kathy Hochul and the Governor’s Office of Storm Recovery for providing the County with the needed resources for this critical project and for our partners in the Village of Island Park.”
Downtown revitalization and storm mitigation efforts will include approximately $1.3 million in improved pedestrian walkways and traffic calming devices, such as curb extensions, ADA compliant sidewalk ramps and aprons, as well as mid-block crosswalks, planters and road resurfacing along Long Beach Road in downtown Island Park. Drainage mitigation will include a mix of conventional and green infrastructure, including new catch basins and several environmentally friendly rain gardens to absorb and treat collect stormwater before reaching local waterways. The hybrid revitalization/storm mitigation project is scheduled to be complete by next year.
“These flood mitigation projects are essential to protect the Village of Island Park from the threat of future storms,” said New York State Senator Todd Kaminsky. “9 years after Superstorm Sandy, it is essential that we redouble our efforts to fortify and protect communities and I am thrilled that this project is finally coming to fruition.”
“Eileen Méus, Deputy Executive Director for the NY Rising Community Reconstruction and Infrastructure Programs at the Governor’s Office of Storm Recovery, said, "The Island Park transit-oriented development project will improve critical infrastructure and add flooding prevention measures to improve resiliency. GOSR is proud to partner with Nassau County and other local stakeholders on this grassroots-driven project that will ensure our communities are rebuilt stronger."
The Village of Island Park suffered immense damage during Superstorm Sandy. 1,100 homes in Island Park were damaged by flooding and only 44 were spared. Roads continue to flood in the village during major storms, making them impassable for residents and hard to traverse for first responders.
Other storm mitigation projects that Nassau County and the Governor’s Office of Storm Recovery recently broke ground on include: