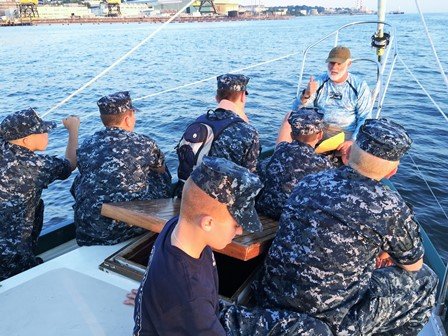 The six-day and six-night sail started on August 14th and included voyages to Connecticut, Cape Cod and back to Mt. Sinai Harbor (Brookhaven – Cedartown Beach) on August 20th. The sea experience included site tours and training. The Voyage of Discovery empowered the young sailors with confidence, courage and character through this opportunity to sail the Nada. Prior to the sail, the Sea Cadets received months of hands-on training in coastal navigation and seamanship at the Sea Cadet training program in East Moriches.

The Voyage of Discovery was supported by a generous sponsorship from Ronkonkoma-headquartered Retlif Testing Laboratories, a leading independent testing laboratory.  Retlif President Walter Poggi commented, “We felt it was a wonderful opportunity to promote critical self-reliance and teamwork in young cadets while giving them the opportunity to experience history, science and inspiration.”

“This was a life-changing experience for these young men,” commented Captain Noakes. “Our mission is to inspire young people, build their confidence, character and transform their lives.”

The Sea Cadets earned the privilege to participate in the adventure and were selected by the unit leaders from the Sea Cadet training program. Life lessons were taught at sea as the Sea Cadets were on 4-hour rotations, 24-hours a day throughout the voyage.

“The voyage tested our limits and provided the opportunity of a lifetime.  It also taught us valuable skills that become important at sea,” said Cadet Wesley Pace, of Shoreham. “To get from point A to point B, the crew had to work as a team. No matter how hungry or how tired we were, we worked together to get the task done.”

The journey began as the Nada set sail on August 14th at 4 p.m., leaving Mt. Sinai Harbor. The crew sailed through the night and arrived at dawn on the Thames River in Connecticut. The Sea Cadets toured the Coast Guard Academy – Jacob's Rock (Sail Training Facility), and the three-masted USCGC Eagle barque before departing New London that night.  They then sailed to the Stellwagon Bank area north of Cape Cod off the coast of Massachusetts to study humpback whales before returning to Mt. Sinai.

For more information on Voyage of Discovery and a Daily Log of the Voyage, Please visit: www.SailingNada.org.