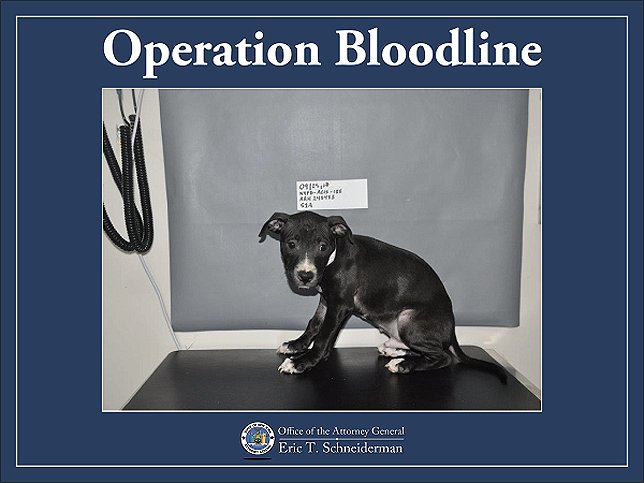 One of numerous dogfighting dogs recovered during Operation Bloodline.

Suffolk County, NY - October 19, 2017 - Attorney General Eric T. Schneiderman and Suffolk County Police Commissioner Timothy Sini today announced the takedown of a major dogfighting ring in which the defendants are alleged to have actively engaged in breeding and training American Pit Bull Terriers (“Pit Bulls”) for profit. The investigation, dubbed “Operation Bloodline,” resulted in the rescue of 36 pit bulls and three felony arrests.
“Dogfighting is an obscenely vicious and cruel form of animal abuse that tortures animals and endangers the safety of the public. It’s barbaric, despicable, and illegal,” said Attorney General Schneiderman. “No animal should be forced to fight to the death for human entertainment and profit, or bred and trained for that purpose. We’re committed to ending this vicious blood sport, and will continue to hold abusers accountable.” 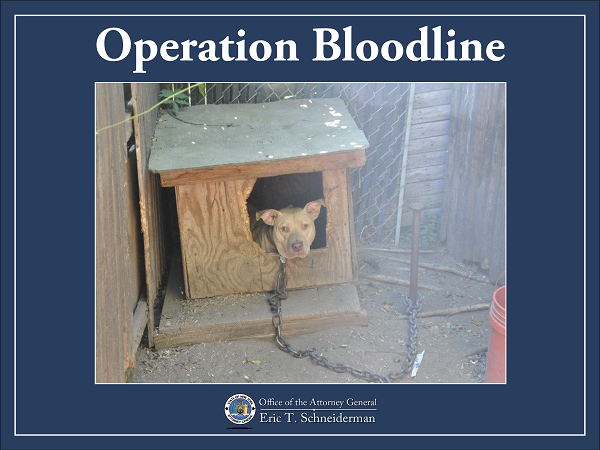 Photo Credit: Office of New York Attorney General Eric T. Schneiderman
“The Suffolk County Police Department will continue to seek out such depraved individuals who have the mistaken belief they have the right to beat, maim and murder innocent animals,” Suffolk County Police Commissioner Timothy D. Sini said. “There is no place in our county or society for such inhumane acts of abuse towards any animal and especially for profit. Our department is committed to seek out perpetrators involved in dog-fighting and animal cruelty and to work with our state and local law enforcement partners to bring charges to the fullest extent the law allows. And I especially thank Attorney General Schneiderman for his leadership on this important issue.”
The Attorney General’s Organized Crime Task Force and the Suffolk County Police Department were assisted in their investigation by the New York City Police Department’s Animal Cruelty Investigation Squad (“ACIS”), as well as the American Society for the Prevention of Cruelty to Animals (ASPCA), which offered their expertise in evidence collection and the removal and sheltering of the rescued animals, and the Town of Babylon Department of Environmental Animal Control (DEAC), which also provided shelter for some of the rescued animals. 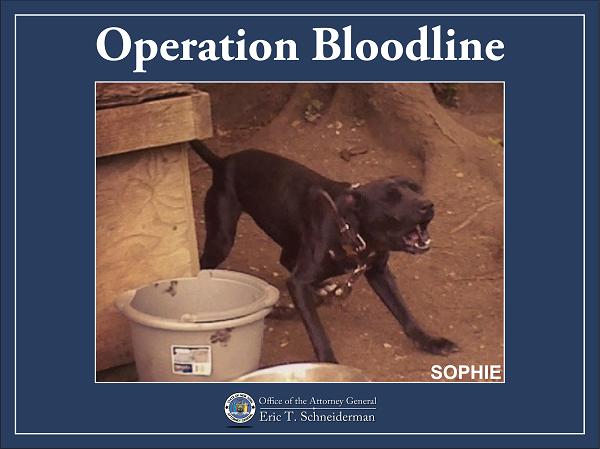 Photo Credit: Office of New York Attorney General Eric T. Schneiderman
Beginning in March 2017, the Attorney General’s Organized Crime Task Force (OCTF) and the Suffolk County Police Department (SCPD) launched “Operation Bloodline” following reports of dogfighting on Long Island.
Beginning on September 28th and continuing through yesterday evening, investigators executed search warrants at two Suffolk County locations, both in Wyandanch, seizing evidence and rescuing the 36 pit bulls (ranging in age from one week to seven years). Prosecutors allege that the dogfighting ring had been operating at those locations and elsewhere in Suffolk County since at least March, when they first began the investigation.
Richard Davis, 34, Martin Newkirk, 49, and Taikeem Wheeler, 26, of in Wyandanch were arrested yesterday and arraigned today on complaints charging each of them with multiple felony offenses of Prohibition of Animal Fighting in violation of New York State Agriculture and Markets Law §351(2)(b), Conspiracy in the Fifth Degree, and other Animal Cruelty crimes.  The defendants are alleged to have each operated a so-called kennel that actually served as staging ground for the dogfighting ring: Davis operated the Roll Right Kennel on Birch Street; Newkirk operated the Rise ‘n’ Shine Kennel on Irving Avenue; and Wheeler operated the Across the line Kennel on North 26th Street. 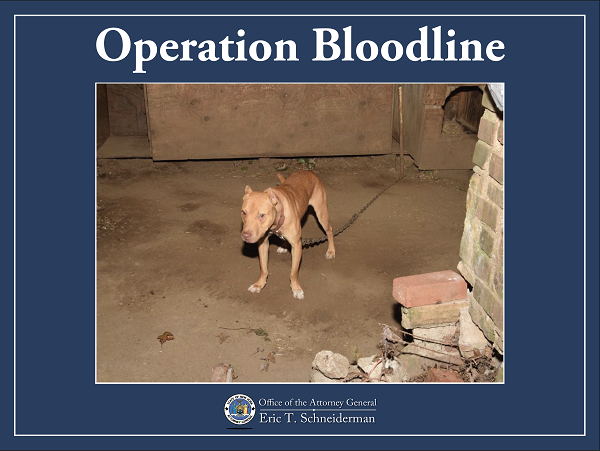 Photo Credit: Office of New York Attorney General Eric T. Schneiderman
“Dog fighting is a barbaric act that exploits the trusting nature of innocent animals and condemns them to a life of violence and suffering for human profit,” said Matt Bershadker, president and CEO of the ASPCA. “We are thankful for our partners in prosecution and law enforcement for continuously increasing their commitment to eradicating this inhumane blood sport, which tragically persists in the dark corners of our society.”
As a result of this investigation, 14 pit bulls were rescued from Davis’ 38 Birch Street home; over 20 pit bulls were rescued from Newkirk’s 135 Irving Avenue home; and two pit bulls were rescued from Wheeler’s 165 N. 26th Street home. Over half of the dogs rescued are puppies.
All 36 of the pit bulls were found virtually imprisoned in deplorable conditions, often tethered to heavy chains and segregated from one another, with no visible food or drinkable water, and with injuries consistent with earlier fights. One had an untreated broken front leg and another was significantly underweight. Virtually all of the adult pit bulls had fleas, dirty coats, and long claws, evidence of their solitary life on hard ground and indications of rarely having ever been walked. The majority of the pit bulls were found with numerous bite wounds that left scars; none appear to have been treated by a veterinarian. 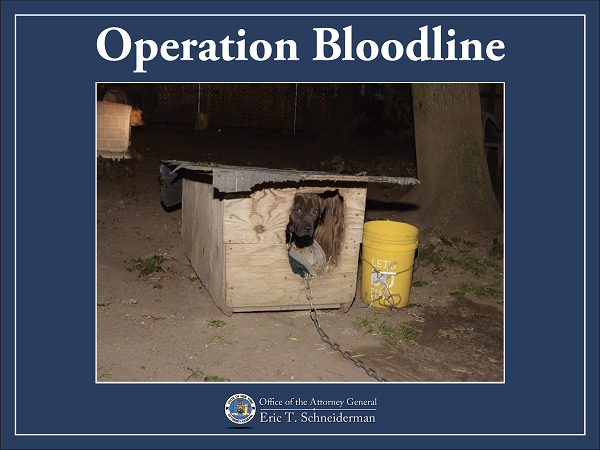 Photo Credit: Office of New York Attorney General Eric T. Schneiderman
While veterinary medical supplies were seized at each of those premises, no veterinary records were located at either location, as dogfighters themselves usually treat their dogs’ injuries as not to arouse suspicion of their illicit dogfighting activities. Almost all of the pit bulls seized pursuant to the search warrants had been isolated from one another; they were tethered to heavy chains, were singularly crated, and/or were segregated in their own kennel. These past injuries and conditions are indicative of training pit bulls to engage in dogfighting, in part, by severely limiting their ability to socialize with other pit bulls unless they are engaged in a fight or breeding. Additionally, prior to the actual fight, owners often engage pit bulls in a ten-minute “bump” or “roll” in order to test a younger dog to see if it is a “game dog.”
Police recovered numerous items of dogfighting paraphernalia that demonstrate the sophistication of the alleged training and breeding of these dogs by Wheeler, Davis, and Newkirk. Those items include bloody breaking sticks (which are designed to separate pit bulls when one’s jaw becomes latched in a grip on its opponent while engaged in dogfighting), as well as numerous heavy chains, double-thick dog collars, weighted dog vests, treadmills, and performance-enhancing dietary supplements. These items are often used to build strength in a pit bull’s neck and shoulders, to control its weight, and to increase its endurance and stamina, as a dogfight to the death can last longer than an hour.
Dog fighters often make their money by selling dogs from strong “bloodlines,” descended from other successful fighters. Many of the pit bulls rescued in this case were of the RedBoy, Jeep, and Beast bloodlines, which are well-known bloodlines that dogfighters attempt to pass on through breeding, for the sole purpose of developing future pit bulls that are aggressive and willing to engage in dogfighting. Several were infected with a red blood cell parasite known as Babesia gibsonii, which is substantially more prevalent in fighting pit bulls.
Unfortunately, two of the dogs had to be euthanized because they had been attacked by their mother. A third dog, named Sophie, had been so abused and tortured that the ASPCA determined that she had become a threat to humans and had to be euthanized as well. Wheeler allegedly touted Sophie’s prowess as a dogfighter, citing her bloodline as the daughter of one of his other pit bulls who had won multiple fights.
The rest of the dogs are currently being sheltered by the ASPCA in order to allow them to heal and hopefully be retrained and adopted.
Dogfighting is a crime in all 50 states. In New York, dogfighting and the breeding and training of dogs for that purpose are felonies, and each charge carries a maximum penalty of four years in jail and a fine of $25,000. Breeders of pit bulls sell the offspring of fighting pit bulls for upwards of $1,600 per puppy. The fights themselves are often to the death, with owners and spectators placing bets on the outcomes.
In May 2013, the Attorney General announced his Animal Protection Initiative, which included the goal of shutting down underground animal fighting rings across the state. New Yorkers can provide anonymous tips about potential animal fighting rings or report animal abuse by calling 1-866-697-3444. For more information on Attorney General Schneiderman’s Animal Protection Initiative, visit www.ag.ny.gov/animals.
The charges are merely accusations and the defendants are presumed innocent unless and until proven guilty in a court of law.
This case was investigated by OAG OCTF Investigator Derek Stevens, under the supervision of Deputy Chief Christopher Vasta and Chief Dominick Zarrella, as well as SCPD Detective Philip Alvarez, under the direction of Police Commissioner Timothy Sini. The case is being prosecuted by OCTF Assistant Deputy Attorney General Thomas Luzio. Deputy Attorney General Peri Alyse Kadanoff runs the Organized Crime Task Force.