It's like the mythical sea creatures you hear about in stories, but this time it's the real thing. An 18-foot oarfish is discovered. 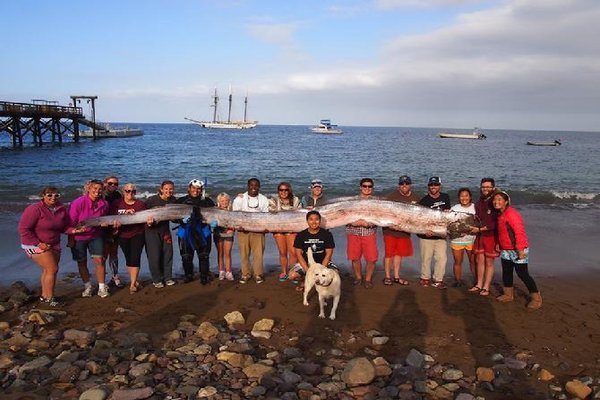 The sight of the 18-feet-long oarfish discovered off California’s Catalina Island on Sunday will have you thinking it’s a sea monster.

The silvery serpent-like fish with eyes the size of half dollars was discovered by marine science instructor Jasmine Santana of the Catalina Island Marine Institute (CIMI) while snorkeling. It’s what you’d call “the discovery of a lifetime,” according to staffers at CIMI.

The sighting of an oarfish, whether dead or alive, is rare since they dive more than 3,000 feet beneath the ocean’s surface. To find one this large, it’s a real bonus.

The carcass was spotted when Santana was about 30 feet deep. She managed to drag the carcass that weighs as much as 300 pounds by the tail for more than 75 feet when she was able to get more help. It required 15 people to get on to shore.

Tissue samples and video footage has been sent to be studied. The oarfish is said to have died of natural causes.

It’s currently on ice and there are plans to bury it on the beach to decompose so that the skeletal remains may be eventually placed on display.

Oarfish can grow to 56 feet in length and is the longest bony fish in the world, according to CIMI.