Researchers believe they have discovered the reason hundreds of dolphins have washed up from Long Island down to North Carolina. 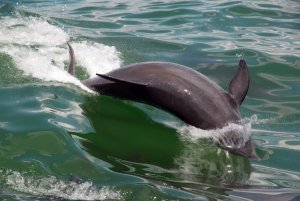 An inordinate amount of dolphins has been beached along the East Coast this year, many of them appearing weak and malnourished and the majority already dead and decomposing by the time of their discovery. Reports of beached dolphins were an almost daily occurrence on Long Island in the month of July, as the total number of incidents between New York and North Carolina grew to 488 on the year—more than 300 above the normal annual rate and nine times this historical average in the mid-Atlantic region for July and August.

Investigators were initially puzzled by the drastic increase in deaths, but researchers from the National Oceanic and Atmospheric Administration believe they have now discovered the cause. Signs of cetacean morbillivirus, an affliction similar to measles in humans and canine distemper in dogs, have been found in 32 of the dolphins studied by NOAA.

Presently, there is no vaccination for cetacean morbillivirus and no method to disperse such a cure among large populations, though research with other animals is underway. The disease can affect various organisms in different ways, typically causing symptoms such as skin lesions, brain infections and pneumonia in dolphins; it is usually transferred through the air or direct contact with other animals, and is not infectious to humans. Scientists are hopeful that their research will allow them to address factors which allow for its spread.

The morbillivirus was also responsible for the last major dolphin die-off between 1987 and 1988, during which 740 deaths from New Jersey down to Florida were attributed to the virus. If the infection follows the same pattern as it did in the ‘80s beachings will likely continue through next year, until the remaining population develops a resistance to the morbillivirus. Bottlenose dolphins have a lifespan of 40-50 years, but future generations may become susceptible to the disease just as has the present one.