The cards contain a list prompts describing the best ways to communicate with the individual and visual cues. 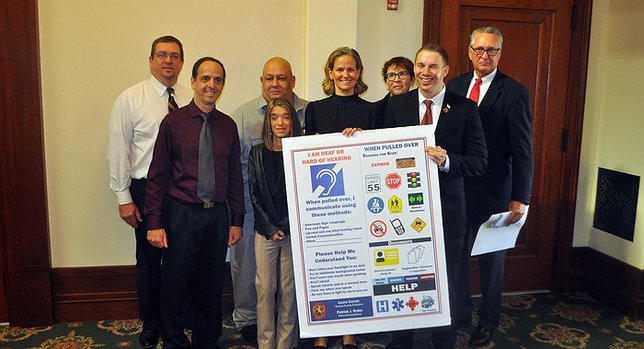 Mineola, NY - October 12, 2018 - Today, Nassau County Executive Laura Curran signed into law a bill sponsored by Legislator Joshua Lafazan (Woodbury) that directs the Nassau County Police Department to produce and distribute cards that deaf and hard-of-hearing drivers can use to facilitate effective communication with police officers and first responders.
Legislator Lafazan’s proposal was adopted unanimously by the full Nassau County Legislature on Wednesday, Sept. 26.
Designed to be easily affixed to a car’s sun visor, the cards contain a list prompts describing the best ways to communicate with the individual and visual cues describing: motor vehicle and traffic offenses; whether the individual is being warned, ticketed or arrested; police directives; and various forms of assistance the motorist might be in need of, such as directions to a nearby hospital or gas station.
“As lawmakers, it is our responsibility to ensure the Nassau County Police Department and its dedicated officers have every tool at their disposal to perform their duties at the highest level,” Legislator Lafazan said. “Providing this new resource marks another step forward in the ongoing work of meeting the needs of Nassau County’s deaf and hard-of-hearing residents. I thank my colleagues for embracing this proposal and County Executive Curran for signing it into law.”
“Thank you Legislator Lafazan for introducing this important legislation, which will greatly assist our Nassau County Police Officers when communicating with individuals with hearing impairments,” County Executive Curran said. “The safety and well-being of every resident in Nassau County will always remain our top priority.”
The cards will be sent to every Nassau County resident registered with the DMV as deaf or hard of hearing. Cards will also be distributed to Nassau County DMV offices, police precincts, and policing and community centers within 60 days of ratification.
“Legislator Lafazan’s bill will bring awareness, conversation and effective communication with deaf individuals and/or the hearing impaired,” Nassau County Police Commissioner Patrick Ryder said. “From the law enforcement perspective, our officers will embrace the ability to communicate positively with hearing impaired individuals whether they are in need of assistance or the victim of a crime."
This is the second legislative proposal sponsored by Legislator Lafazan that bolsters public safety for deaf and hard-of-hearing Nassau County residents. Earlier this year, Legislator Lafazan sponsored and secured passage of a law requiring American Sign Language (ASL) interpreters to be present at all emergency-related news conferences in Nassau County.
“Legislator Lafazan introduced and helped pass two laws that significantly benefit Nassau County’s Deaf and hard of hearing community,” Loretta Murray, Executive Director of Mill Neck Services, said. “Both the Deaf visor bill and the interpreter bill for regional public announcements helps fulfill the promise of the Americans with Disabilities act for equal access under the law. It’s a pleasure working with Legislator Lafazan and the Nassau legislature, and I’m sure we will work together in the future on other matters of interest to Nassau’s Deaf and hard of hearing community.”