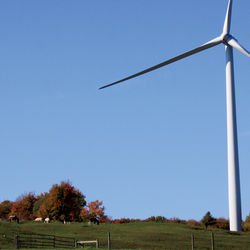 Albany, NY - October 2, 2015 - Governor Andrew M. Cuomo today announced the launch of a clean energy competition for colleges and universities in New York State. The competition will challenge student-led coalitions across the state to develop creative ideas to aggressively reduce greenhouse gas emissions on school campuses and beyond. The three groups that propose the best ideas to invest in clean energy will each win $1 million to help implement their plans.

“Our State’s college students have a pivotal role to play in building a cleaner and more energy-efficient future – and with these awards, we hope to inspire the next generation to change the world,” Governor Cuomo said. “Climate change has become one of the most defining issues of our time, and we must act now to address it. I encourage students across our state to dream big, and help New York continue to be a leader in changing the way we think about energy and the environment.”

Richard Kauffman, Chairman of Energy & Finance for New York State, said:  “Generation after generation, students at our colleges and universities have been motivated to find solutions to the most pressing challenges of the time. Today’s announcement by Governor Cuomo will help New York’s great student minds think big and turn ideas into action, driving the State towards a clean energy future for all.”

Student-led university groups, which may include faculty and other staff members, will be evaluated on their ideas to improve energy efficiency, increase renewables and reduce overall greenhouse gas emissions. Ideas and plans will be submitted to the New York State Energy Research and Development Authority in early 2016 with awards expected later that year.

The State University of New York and private colleges like New York University have already made notable strides in investing in clean energy. SUNY is on track to achieve its commitment to improve energy efficiency 20 percent by 2020 and NYU has signed the American College and University President’s Climate Commitment to be climate neutral by the year 2040.

The awards will be administered as part of the REV Campus Challenge, an initiative to recognize and support the colleges and universities leading in the clean energy transformation.

Governor Cuomo’s Reforming the Energy Vision (REV) is designed to build a cleaner, more affordable and resilient energy system for all New Yorkers through a combination of new energy policies, state-wide initiatives and regulatory reforms. This protects the environment and supports the State’s goal to reduce greenhouse gas emissions by 40 percent while generating 50 percent of its electricity from renewable energy sources by 2030. Successful initiatives already launched as part of REV include NY-Sun, NY Green Bank, NY Prize, K-Solar and a commitment to improve energy affordability for low-income communities.

Governor Cuomo made today’s announcement as part of New York University’s Know Tomorrow Day of Action, which is a student-led campaign on climate change, uniting thousands of students across the country as well as dozens of politicians, activists, performers and corporate partners. On October 2nd, 2015, students at more than 50 campuses across the country are hosting events ranging from performances and speakers to activity fairs and road races in an effort to educate millennials about the realities of climate change and push leadership to shape a better tomorrow.

Other notable participants in the Know Tomorrow Day of Action include: