Players will battle with modified and homemade soft dart blasters at Elwood Park in Huntington. 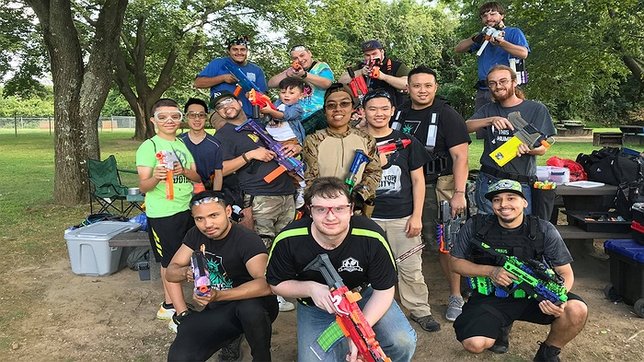 Everybody was Nerf gun fighting! Well, about a dozen or so people at least.

Long Island Nerf Ops (LINO) is hosting their 2nd Nerf event this weekend and anyone who’s interested in some soft pellet fun is invited to join them down at Elwood Park in Huntington on Sunday, October 6th.

Nerf battles can attract a crowd. A recent New York City Nerf Ops event drew over 100 people, according to Reddit user ItzAlphaWolf who posted a message about the event in a Long Island subpage on the site.

ItzAlphaWolf said that he got into playing Nerf when he was in college.

“There was I club I joined freshman year, and I was an active member for all 4 years I was there,” ItzAlphaWolf told LongIsland.com.

About 15 or so people are confirmed to show up but more might join in as the event gains steam. ItzAlphaWolf said that most of the Nerf brand blasters are modified for high performance, firing their darts anywhere from 150 feet per second to around 250 feet per second. Other blasters are homemade blasters they made themselves or purchased. He warns potential players that the modified versions of the blasters are not like your toy guns bought off the shelf.

Find out more information about the event on the LINO Facebook Group page. No realistically painted blasters will be allowed.