Since 2015, Nassau Police officers, and medics, who routinely respond to overdoses, have made at least 768 ‘overdose reversals’ or ‘saves’ with Naloxone. 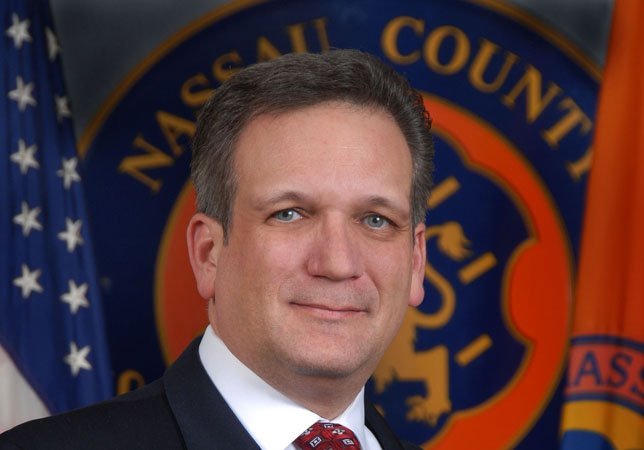 Mineola, NY - October 4, 2017 - Nassau County Executive Edward P. Mangano announced today that at least 50 people, who received lifesaving training by Nassau officials over the past 5 years, have reported using those skills to save the life of a friend or family member overdosing on opioids. These 50 were among about 9,000 (mostly non-medically trained) people trained by County officials to administer an overdose reversal agent called Naloxone (Narcan), which was provided to them for free, to reverse the deadly effects of an opioid overdose.
“As we approach the 5th anniversary of becoming the state’s first of its kind registered overdose responder program, we’re thankful to have spared so many families the horror of losing a loved one to drugs. Yet we are reminded that one untimely death is too many and there is much more work to do,” County Executive Mangano said. “We must continue our aggressive efforts to combat the opioid epidemic.”
Since 2015, Nassau Police officers, and medics, who routinely respond to overdoses, have made at least 768 ‘overdose reversals’ or ‘saves’ with Naloxone. There were 354 reported overdose deaths during that time period. At least one Long Islander – and about 142 Americans – die each day from drugs. Narcan works on all opioids, which include the prescription pain meds such as oxycontin, vicodin, and morphine - as well as on heroin.
The kits Nassau has provided trainees over the years come free, courtesy of the AIDS Institute of the NYS Health Department, as part of its Harm Reduction initiative.
County Executive Mangano urged local school officials to utilize this free state program, to safeguard middle and high school students from a potentially deadly overdose. He asked that they join other school districts around the state already registered by the NYS Department of Health, which allows schools to receive Naloxone, and the training session, for free. The NYS Board of Education ruled earlier this year that Naloxone may be kept in school buildings, accessible to all trained staff to administer in the event of a possible overdose.
“It’s unfortunate that a program like this is needed today, in order to keep school-age children safe, but it is a reality,” County Executive Mangano said. “Statistics show that students as young as 11 and 12 are beginning to “experiment” with dangerous new drugs including narcotic pain pills, often prescribed to someone other than themselves.”
As of June 2017, eight of Nassau’s public school districts have become registered opioid overdose prevention programs: East Meadow, East Rockaway, Herricks, Jericho, Malverne, Mineola, North Shore and Rockville Centre. Others that have a naloxone use policy in place include: Bethpage, Long Beach, North Bellmore and Hewlett-Woodmere. See the NYS DOH webpage for instructions on becoming a registered program at: https://www.schoolhealthny.com/OpioidOverdose.
Anyone who is in contact, or lives with, someone actively abusing opioids, can also now purchase Narcan in a simple, pre-assembled nose spray, at CVS, Walgreens and many other area pharmacies, without a prescription. The cost of the lifesaving medication is covered by Medicaid and private health insurance prescription coverage, and usually amounts to a minimal co-pay. A list of pharmacies that dispense Narcan can be found at www.health.ny.gov/overdose. For a list of other NYS registered opioid overdose prevention programs, which provide free training on recognizing an opioid overdose, visit: https://www.health.ny.gov/diseases/aids/general/resources/oop_directory/index.htm.