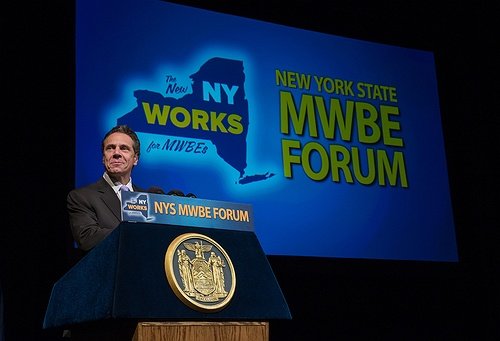 Albany, NY - October 1, 2014 - Governor Andrew M. Cuomo today signed legislation designed to increase the number of certified Minority- and Women-Owned Enterprises (MWBE) in New York State. The bill (A.9668/S.7314) authorizes the state to grant a one year provisional MWBE certification status to firms that have historically been excluded from participating in state contracts.

“Increasing the number of minority and women-owned companies that do business with the state is an important way to encourage diversity and grow opportunities for New Yorkers,” Governor Cuomo said. “We have made significant progress over the past four years in supporting MWBEs, and this law is another step forward. I am proud to sign this legislation, and I thank Senator Hassell-Thompson, Assemblymember Rodriguez and the many other community leaders and advocates who worked to make this change a reality.”

In 2010, a study commissioned by the State found that there was a significant disparity in State contract participation by MWBEs relative to their overall state-wide availability. As a result of this finding, a new law was implemented to provide for the maximum feasible participation of MWBEs on the performance of State contracts. That law provides for increased opportunities for doing business with the State for MWBEs that satisfy certain certification criteria, which include the requirements that MWBEs not employ more than 300 employees (i.e. small businesses) and that the owners of MWBEs not have a personal net worth that exceeds $3.5 million, adjusted annually for inflation (which is approximately $3.7 million today).

Since 2010, a substantial number of firms have expressed concerns that the small business and personal net worth requirements have had the unintended consequence of excluding a significant number of MWBEs from participating on State contracts. In fact, many of those unintentionally excluded businesses are firms that are still maturing and are participating in highly competitive industries where it is exceptionally difficult for them to be successful without exceeding the small business or personal net worth requirements.

The bill signed today by the Governor addresses this issue by authorizing the Director of the State’s Division of Minority and Women-Owned Business Development to grant a one-year provisional MWBE certification status to firms in certain industries, without regard to the personal net worth and/or small business requirements.

Senator Ruth Hassell-Thompson said, “I am pleased to see this MWBE legislation signed into law. Our State is home to some of the most innovative and talented professional firms that are led by individuals of diverse backgrounds. During the last disparity study, we had noticed that several businesses were unfortunately prohibited from being considered under this program as a result of personal net worth. As we continue to formulate a policy aimed at inclusion and meaningful participation by MWBEs across New York State, it is important to evaluate current practices and modify them when necessary. This legislation will ensure the MWBE program is able to provide access to small businesses that faced difficulties being certified as a result of assets.”

Assemblymember Robert J. Rodriguez said, "My thanks go to Governor Cuomo for signing this bill which supports the State's commitment to the Minority Women Business Enterprise (MWBE) program. By increasing participation, this bill provides opportunities to firms and individuals who can often be overlooked, but are eager and qualified to push New York State forward. I would also like to extend my thanks to Senators Ruth Hassel-Thompson and Betty Little for helping to secure passage of the legislation, and their commitment to the issue."

This new provisional certification would be subject to the conclusion of an availability analysis and the Director’s determination that the requirements in question have significantly contributed to excluding MWBEs within that industry from participating on State procurements. This provisional certification would come up for review annually so that the Director could determine whether such certification for businesses in that particular industry is still needed in light of the changing dynamics within that space. This law is effective immediately.