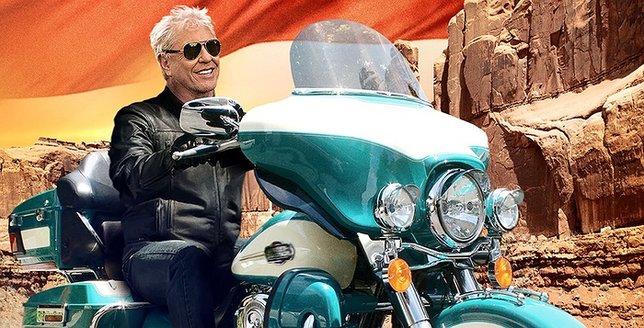 Stony Brook, NY - Sept. 26, 2018 - Emmy Award winner, Tom Berenger, is Tom Needham’s special guest this Thursday at 6 pm on WUSB's ‘The Sounds of Film.’ He will be discussing his latest film, ‘American Dresser.’
‘American Dresser’ is a modern day motorcycle road trip film written, produced and directed by Long Island native Carmine Cangialosi. The film, which has elements of a classic western, features Tom Berenger, Keith David, Gina Gershon, Penelope Miller and Bruce Dern. ‘American Dresser’ follows  a Vietnam veteran, John Moore (Tom Berenger) who decides to confront the mistakes of his past by fulfilling a lifelong dream of completing a cross-country motorcycle road trip.  Joined by his best friend, Charlie (Keith David), they take off exploring new territories, meeting interesting characters and learning important life lessons.
Tom Berenger is an award-winning actor known for his roles in movies and television. In 1986 he was nominated for an Academy Award for his portrayal of Staff Sergeant Bob Barnes in Oliver Stone’s ‘Platoon.’ Through the years, he has appeared in many memorable films including ‘Looking for Mr. Goodbar,’ ‘The Big Chill,’ ‘Eddie and the Cruisers,’ ‘Betrayed,’ ‘Gettysburg,’ ‘Training Day,’ and ‘Inception.’ He also won the Primetime Emmy Award for Outstanding Actor in a Miniseries or a Movie for his performance in ‘Hatfield’s & McCoys.’
About the Sounds of Film
‘The Sounds of Film’ is the nation’s longest running film and music themed radio show. For the past 30 years, the program has delivered a popular mix of interviews and music to listeners all over Long Island, parts of Connecticut and streaming worldwide live on the internet. Previous guests on the show include Peter Fonda, Eric Stoltz, Thora Birch, Michael Moore, Jesse Ventura, Billy Joel, Carter Burwell, and Dr. Jordan Peterson.