A new program to discourage distracted driving is being launched by Governor Cuomo. 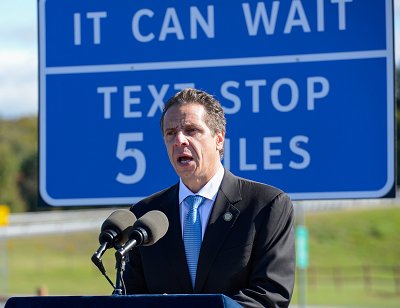 Governor Cuomo unveiled this week his plan to create “texting zones” where drivers can pull over and safely use their cellphones, beginning with 91 stops along major highways in New York State. The plan, which includes two zones off I-495 in Huntington, will utilize existing Park-n-Ride facilities and provide parking spaces for motorists who wish to send a text or make a call.

“We are now launching special Texting Zones to allow motorists to pull over and use their phones. These Zones will be identified with signs along the Thruway and State Highways, reminding drivers that there is a nearby opportunity for them to legally and safely use their phone,” said Cuomo. “With this new effort, we are sending a clear message to drivers that there is no excuse to take your hands off the wheel and eyes off the road because your text can wait until the next Texting Zone.”

Signage which reads “Text Stop” and “It Can Wait” will be posted several miles before each zone in the coming weeks to alert drivers to the newly designated areas; a total of 298 signs are planned for the program’s launch. The initiative comes after a summer in which New York police officers doled out a stark increase in tickets for distracted driving—21,580 from July 4th to September 2nd, compared with 5,208 from the same period last year.

Increased ticketing resulted from a campaign which began on Independence Day and ran through Labor Day weekend, consisting largely of increased highway patrols through unmarked CITE vehicles. Concealed Identity Traffic Enforcement vehicles are police SUV’s designed to allow officers to more easily peer into the front seats of cars in front of them and see whether the driver is sending a text message. Penalties for distracted driving were also raised, putting 5 points on the licenses of motorists caught using their phones instead of 3, and increasing the suspension and revocation periods for young drivers.

“New York State is continuing to use every tool at its disposal to combat texting-while-driving,” said Cuomo as he unveiled the new program.

Joan McDonald, New York State Department of Transportation Commissioner, added “This campaign is sending a clear message to motorists: It can wait. There is no text that is important enough to jeopardize a life, and anyone caught texting while driving will face stiff penalties. I want to thank Governor Cuomo for his leadership to fight distracted driving and make our roads safe for all users.”