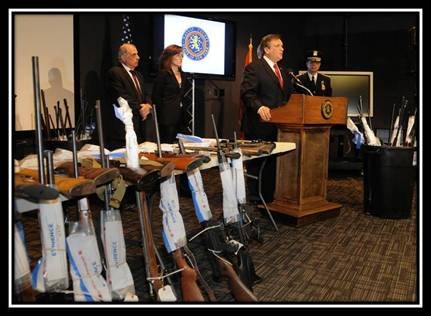 “The Gun Buyback Program, using asset forfeiture dollars, has taken nearly 3,000 guns off our streets before they fell into the wrong hands,” said County Executive Mangano. “Community support is critical to the success of this program, and we appreciate Bishop R. W. Harris and the other members of the clergy who have participated in this effort to take firearms off our streets. By working together, we can continue to ensure that Nassau County remains the safest suburban County in the nation.”

“Every buyback event we hold reinforces our commitment to community-based law enforcement and ridding Nassau County of gun violence,” DA Rice said. “By removing these weapons from our neighborhoods, we eliminate the possibility of them being used in crimes or even accidental shootings in the home. I thank Bishop Harris and the wonderful members of Grace Cathedral Church in Uniondale for partnering with Nassau County law enforcement in our fight to make our communities safer.”

Forfeiture funds from the Nassau County Police Department and the District Attorney’s Office are utilized to fund the Gun Buy Back Program.