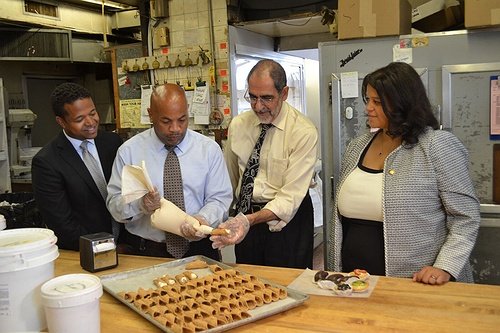 The tour of the 22nd Assembly District extended from Valley Stream, to Elmont, to Floral Park.  Assemblywoman Solages assured that Speaker Heastie understood the multi-faceted dynamics of the Twenty-Second Assembly District. Speaker Heastie partook in numerous activities ranging from filling cannolis at Sapienza Bakery to meeting with local officials, all to attain a better grasp of the dynamics in the district.

The tour began with a performance by Layla’s Dance & Drums at the Elmont Memorial Public Library. The Speaker entered into the Elmont Public Library as he was greeted by the beat of African Drums called djembe, and exuberant dancing.

Following the performance, a brief meeting with local community members was held to discuss the proposal for redevelopment of the southern lot of Belmont Park.  Locals expressed their desire to reissue the ‘Request for Proposals’. Speaker Heastie listened diligently as alterations to the current proposal were suggested, as constituents shared their feelings about how substantial redevelopment of Belmont Park would enrich  the community.

Following the tour of the library, Speaker Heastie visited the Mayor of South Floral Park, Geoffrey Prime. The officials met in the Mayor’s conference room and toured the adjacent firehouse.

The tour continued at Sapienza’s Bakery.  Speaker Heastie and Assemblymember Solages were greeted with a warm welcome by business owner Paul Sapienza, who also serves as the President of the Elmont Chamber of Commerce. Speaker Heastie was invited into the kitchen of the bakery where their baked goods are craftily made.  Mr. Sapienza instructed Speaker Heastie on how to fill Cannolis, and he masterfully filled cannoli shell after cannoli shell. Mr. Sapienza also discuss the challenge being a small business owners in New York State. Experiences such as this gave Speaker Heastie a greater appreciation for the local businesses of the 22nd Assembly District.

Speaker Heastie and Assemblywoman Solages meet with Aaron Watkins-Lopez, at the corner of Elmont Road and Hempstead Turnpike, to discuss the issue of bus transportation in Nassau County. Aaron Watkins-Lopez, Organizer for Long Island Bus Riders Union, discussed the negative impact of bus privatization along with several other ongoing concerns.  Assemblywoman Solages shared possible solutions to these issues.

Following the discussion with the Long Island Bus Riders Union, Speaker Carl E. Heastie visited the Cornell Ruffian Equine Center. The Cornell Ruffian Equine Center, conveniently located adjacent to the Belmont Racetrack, focuses on the medical treatment of horses. Horses are kept in well-maintained stalls and cared for by skilled staff members. The facility Practice Manager, Jill Nordberg, guided the tour through the center, and illustrated how the center was used for the treatment and recovery of horses that have been injured.

After the Tour of the Equine Center, Christopher Kay, President of the New York Racing Association gave a guided tour of Belmont Park Racetrack. They discussed the beginnings of Belmont Park and how it remains a staple to the Elmont community. Future plans for redevelopment of the racetrack were considered, as the speaker favorably highlighted the importance of Assemblywoman Solages’ voice on the matter.

The tour was concluded with a meet and greet with small business owners at the Trinidadian owned restaurant, Chef B’s in Valley Stream. The atmosphere was warm and welcoming as several local small business owners greeted the speaker and discussed the trials and tribulations of owning a business in New York State.

“I was excited when I received notice that Speaker Heastie planned to visit the 22nd Assembly District, which I represent.  This was a great opportunity for local community leaders and business owners in the 22nd Assembly District to not only meet Speaker Heastie, but to also express to him personally their perspectives, concerns, and ideas.” said Assemblymember Michaelle Solages.