Long Island's Eric Citron is a magician and mentalist by trade, and specializes in a comedy, magic, and mind-reading act.

Long Island, NY - September 14, 2017 - For centuries, the public has been amazed and confounded by practitioners of magic; knowing that what they’re watching isn’t real – or is it? – never quite being able to guess how the magician performing for them is pulling off their near-impossible feats of wonder. It’s an addictive formula that has kept audiences across the world entertained, some begging for more.
Eric Citron of Setauket, a magician and mentalist by trade, specializes in a comedy, magic, and mind-reading act that is a completely interactive experience for the many attendees at his sold-out performances; in Citron's very own words, he “makes stars out of the audience.”
“I combine comedy with mind-blowing mentalism effects,” he said. “As an example, I'll have the whole audience pick random numbers and at the end of the routine, it turns out those random numbers they picked are actually the winning numbers for the following night's Powerball drawing. It's very interactive, very funny, and my act will leave them smiling and scratching their heads at the same time for sure.”
While Citron has been a full-fledged 'mentalist' for the past nine years, he professes lifelong love of magic in general, having delved deeply into its mysterious depths for the past 40 -plus years. He got his start in the business of misdirection and mystery as a young lad, inspired by several family members who were also magicians at the time.
“I started when I was 6 years old. I had two uncles who were professional magicians...it's been in my DNA ever since I could remember,” he said. “I love everything about magic...I've put on magic conventions, I've talked about magic, I've created it, and I'm involved in all aspects of it. I even have an online magic store called TheGreatAmericanMagicCompany.com, so I'm involved in a lot of different aspects of the craft.”
For number of years Citron plied his trade solely as a magician, working a large amount of family-friendly events and children's parties; however, wishing to expand his repertoire and work with a more mature crowd – he notes that it's easier to keep the attention of adults as opposed to rowdy, rambunctious kids – he began to rely less on sleight-of-hand tricks and props and more on the mind-boggling aspects of mentalism. His act is still family-friendly, he said, but due to the complexities now involved he only recommends children aged 12 and up attend his shows.
“As I grew older, I really fell in love with mentalism for a few reasons...first, you don't have to travel with as much equipment, and it appeals to the intellectual side of people, where you can find out things about them and they have no idea how you could have possibly have known that about them,” he said. “It's kind of like a mental game of chess on a lot of levels, where I'm able to describe someone who has passed away or someone from that person's life that they haven't talked to in 10 years, or take them on a magic journey to Las Vegas where I'm able to tell them the hotel they stayed at, how much money they gambled with, and what game they played while they were at the casino. It's very engaging, and you're always able to come up with new and inventive things to challenge the audience.” 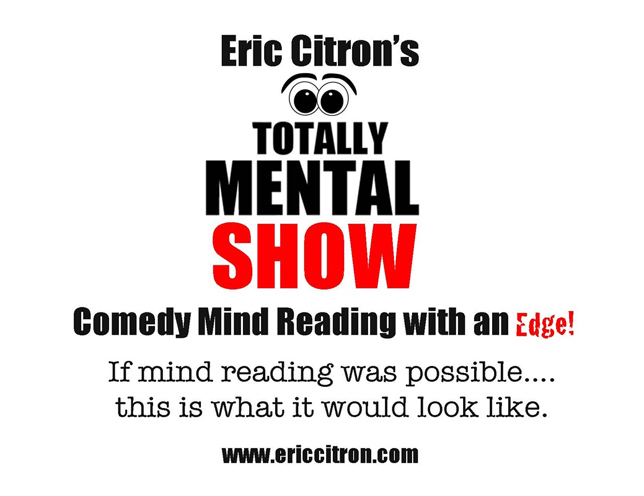 However, one thing Citron is adamant about is the fact that, despite how uncanny his abilities may seem while on stage and working the audience, one thing that he is NOT is a full-blown psychic.
“I don't profess to be able to read anybody's mind...I refer to myself as having ‘psychotic powers,’ and I tell people that I will delve into the inner recesses of their mind and will share any embarrassing thoughts they have there with the audience,” he said. “I don't come across as a psychic reader…it's all entertainment-based, although some of the things I'm able to do throughout my show does blow people's minds. But at the end of the day, it's just a trick.”
Over the course of his lengthy career, Citron has performed for audiences all around the country, from New York to California – as well as Mexico and other countries – leaving a trail of mystified and satisfied audiences in his wake.
Citron’s latest performances, including his upcoming October 15 gig at Governor's Comedy Club in Levittown, are tinged with a degree of sadness and tragedy; his wife unfortunately passed away last July from a very rare form of cancer, and Citron himself also had a recent battle with the deadly disease, having been diagnosed with a rare case of skin cancer that kept him confined to a hospital bed for 39 days. After three surgeries and the partial removal of his left shoulder, he is well on the road to recovery, and is now using his talents to raise money to help those who are in the same situation he once found himself.
“I feel better right now that I have in years...I only have limited use at the moment of my left arm, but luckily with mentalism I'm not manipulating cards and coins like I used to, so it hasn't really affected my act,” he said. “But the reason I'm doing these cancer fundraisers is because my wife passed away six months after she was diagnosed...it was rough on everybody. And while I was in Stony Brook Hospital being treated for my cancer, I promised them when I got out that I would to do fundraisers to give back to the great work that they do every day. So that's my goal.”
Overall though, aside from his recent brush with heartache and tragedy, Citron looks back upon his 40 years in the magic biz with a sense of fondness and joy; after all, it's not everyone that can take a childhood love of mystery and magic and turn it into a lifelong career.
“It's a great feeling...I've done other things in my life, but magic has always been in my blood, and it's just such a part of what I do,” he said. “Believe it or not, there's only about 50,000 magicians in the entire world, give or take a couple, and as far as mentalism goes, there’s probably just 10,000 or less. So it's a small club, and it's very gratifying to be a part of it and to be able to put smiles on people's faces.”
Eric Citron has an upcoming performance of his Totally Mental Show at Governor's Comedy Club on October 15. Find out more at Eric's Facebook page and website.