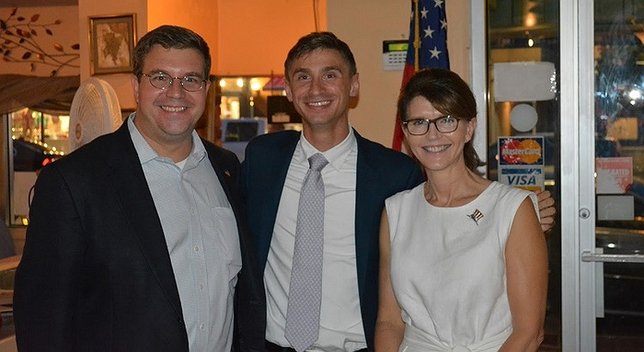 Photo by: Office of John De Vito for State Senate.

The event showcased Democratic Party unity and grassroots momentum in New York’s third Senate district, and the first Congressional district. Both of these races are considered to be some of the most competitive elections which will be held in November.

Despite the upcoming primary the event was extremely well attended, with County Legislator Kate Browning, who has endorsed De Vito also present. The event solidified De Vito’s substantial financial lead over his opponents, and with over 50 attendees, made clear his momentum going into Tuesday’s Democratic primary.

The 25 year-old candidate spoke after Calone, and Congressional candidate Throne-Holst, saying he will be “the state senator who stands up to up-state, who stands up to New York City and says that the time you have used Long Island as a piggy bank is over.”

He also laid out his platform on affordability, the zombie home crisis, and ethics stating “corruption is a bipartisan practice in Albany, but my opponent, chairman of the ethics committee, couldn’t find the political willpower to strip these disgraced, corrupt politicians of their pensions. We need action on ethics in Albany and when you sit silent, you are complicit.”