124 Airmen, Aircraft and Boats Deploying to the U.S. Virgin Islands; 35 Members from Specially Trained Task Force Equipped for Urban Search and Rescue Will Head to Florida. 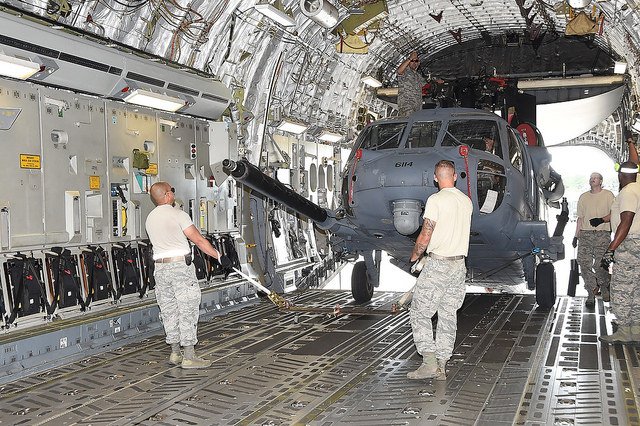 Vehicles and troops are being deployed to aid in Hurricane Irma recovery efforts.

New York, NY - September 8, 2017 - Governor Andrew M. Cuomo today announced that 124 Airmen from the 106th Rescue Wing of the New York Air National Guard will deploy to U.S. Virgin Islands to assist in the response to Hurricane Irma. The team is expected to depart from Gabreski Air National Guard Base in Westhampton Beach this afternoon. Additionally, the Governor is deploying Task Force 2 (NYTF-2), a specialized team of first responders and equipment skilled in structural collapse rescue, excavation emergencies, technical rope rescues, confined space rescue, and other specialized rescues to Florida.
Additionally, Governor Cuomo personally spoke with Governor Ricardo Rosselló of Puerto Rico and administration officials remain in close communication with counterparts in the Dominican Republic and other Caribbean nations in Irma's path, pledging to help in any way they can.
"New York has had much firsthand experience with extreme weather and the devastation it leaves behind," Governor Cuomo said. "Just as New York stood shoulder to shoulder with Texas and Louisiana during Hurricane Harvey, we stand ready to provide any support and assistance we can for our neighbors in need. From Florida, Puerto Rico and the Virgin Islands, to the Dominican Republican and other Caribbean nations in Irma's path, New York is here to help."
The 106th Rescue Wing is deploying three HH-60 Pave Hawk rescue helicopters, and two HC-130 search and rescue aircraft and three Zodiac inflatable rescue boats. The mission personnel include rescue teams, maintenance and support staff, and aircrews. The 106th Rescue Wing Team will be based at the Henry E. Rohlsen Airport on St. Croix and provide search and rescue support on the islands of to St. Thomas and St John's.
The team from the 106th Rescue Wing will be transported south aboard two C-17 aircraft from the New York Air National Guard's 105th Airlift Wing. The wing is based at Stewart Air National Guard Base outside Newburgh. Twelve Airmen from the 105th Airlift Wing will man those two aircraft.
This is the second time in two weeks that the men and women of the 106th Rescue Wing have been called to assist in the aftermath of a hurricane. The wing sent 124 Airmen to assist Texas in recovering from Hurricane Harvey from August 27 to Sept. 1. During their recent deployment to Fort Hood, Texas and the Houston area, the men and women of the 106th rescued 546 people.
NYTF-2 Urban Search and Rescue Team will head to the State of Florida in support of Florida Emergency Services as they prepare and respond to the impacts of Hurricane Irma upon that State. NYTF-2 is a 35-member, state level, Type 3, Urban Search and Rescue team with water rescue capabilities. The team will depart at 5 p.m. today, Thursday, September 7 from our Guilderland, NY Special Operations Facility.
NYTF-2 is administered and operated by the Division of Homeland Security and Emergency Services Office of Fire Prevention and Control. NYTF-2 consists of personnel from OFPC and several local fire and rescue agencies. The additional local agencies represented for this deployment are as follows:
Along with various support and personnel transport vehicles, NYTF-2 will be deploying with six boats for water rescue operations, two tractor trailers with equipment needed for urban search and rescue missions including collapse rescue operations, and two disaster search K-9 teams.
Governor Cuomo also deployed a 30-member State Incident Management Team, an all- hazards multi-state agency resource to Texas on August 31 to assist with response and recovery efforts after Hurricane Harvey. The NYS Incident Management Team is currently assisting in response and recovery operations related to Hurricane Harvey in Harris County (Houston) and Chambers County. Operations have been conducted in Chambers and Harris Counties and is focused on coordination and communication with local authorities, development of situational awareness, and assistance in documenting the extent of damage to the community. On numerous occasions the team utilized NYS DEC's Unmanned Aerial Vehicles, commonly known as drones, to assess situations where flooding made investigations hazardous to the responders. This allowed the IMT to provide real time photos and videos to the Texas authorities to help best determine how to meet the needs of the impacted communities. NYS IMT also provided Geographic Information Services and have generated maps displaying field conditions to enhance situational awareness where communities had needs. The GIS mapping and UAV photos and videos helped enhance decision making for the complex and dynamic situations.
New York has a long history of helping other states following natural disasters. In addition to sending similar assistance to Florida following Hurricanes Matthew, Frances, Ivan, and Dennis, New York dispatched a multi-agency team of more than 300 individuals to assist Louisiana following Hurricane Katrina, as well as another 18-member team after Hurricane Gustav. Additionally, New York has sent crews of firefighters west many times to assist with containing wildfires.