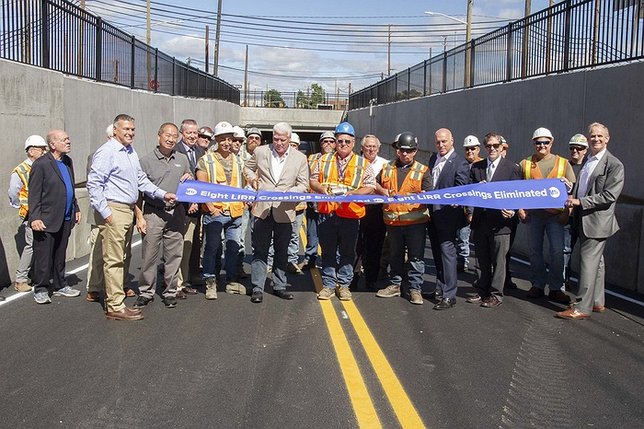 Governor Kathy Hochul has announced the reopening of Willis Avenue in downtown Mineola, unveiling a roadway that passes underneath two new railroad bridges. This underpass replaces a pair of street-level railroad crossings that for decades had created nuisances to nearby residents with the sounding of train horns and crossing bells, and to motorists who had to experience traffic backups with the closure of crossing gates. The crossings were the seventh and eighth of the eight to be eliminated along the LIRR Main Line Corridor in under two years as part of the project.
"This major milestone in the LIRR expansion is another testament to our unbreakable determination as New Yorkers to pursue big, bold infrastructure projects even as we face the most unpredictable and overwhelming circumstances," Governor Hochul said. "The Third Track project will be an invaluable asset in New York's passenger rail network because it will make travel on the LIRR more convenient and safer while significantly expanding train capacity, and we are indebted to the members of our workforce who were onsite working hard to keep this project on schedule through the pandemic."
Long Island Building Trades leader Matthew Aracich, SMART Union leader Anthony Simon and workers who completed the final underpasses on the Third Track project cut a ribbon held by MTA leaders to officially open the latest safety improvement. The Third Track project will bring enhanced service to Long Island, including additional reverse-commuting options, and is being completed by hundreds of construction workers whose trades include electricians, iron workers, laborers, teamsters, carpenters and many more.
"This is a major milestone for what remains the signature example of the MTA's new approach to delivering capital projects on time and on budget," MTA Acting Chair and CEO Janno Lieber said. "Prior to the start of the LIRR Expansion Project, it had been more than 21 years since the most recent crossing elimination, but thanks to our new way of doing capital work, the Third Track project team has eliminated eight busy railroad crossings in less than two years. This is also an example of how we are designing projects to bring completed components to the public without waiting for the entire project to be done."
Long Island Rail Road President Phillip Eng said, "Thanks to this latest grade crossing elimination milestone, this complex section of our rail system is now much safer for our customers and our staff, as well as motorists, cyclists, pedestrians in the communities we serve. The LIRR Expansion Project has always been about creating a safer, more convenient, and more robust railroad for the millions of people who use it each year. I'm proud to say that with each interim completion, we're making that a reality for customers now and for future generations of railroad riders."
Mattew Aracich, President of the Building & Construction Trades Council of Nassau and Suffolk Counties, said, "The Third Track project is a product of the private and public sectors working together to efficiently deliver a project that will benefit the public for decades to come. The real heroes behind this project are the workers, who even during a pandemic, showed up to work to make sure deadlines were met and the project as a whole was completed on time."
Anthony Simon, General Chairman, SMART Union, said, "It is only right that right before Labor Day members of organized labor come together to celebrate the completion of another major project. The work done day in and day out does not go unnoticed—our workforce shows up, steps up, and delivers, and it is thanks to them that the railroad will be that much safer and more convenient for Long Islanders."
Including Willis Avenue, six crossings have reopened to traffic since Sept. 6, 2019, when crews reopened Urban Avenue in New Cassel as an underpass. In New Hyde Park, crews reopened Covert Avenue on Oct. 12, 2019, and New Hyde Park Road on Aug. 24, 2020. In Westbury, crews reopened School Street on Nov. 13, 2020.  Two crossings, at S. 12th Street in New Hyde Park, and Main Street in Mineola, were closed on Oct. 24, 2020, and Feb. 27, 2021, respectively. Crews are building a pedestrian underpass at S. 12th Street, and a pedestrian overpass at Main Street.
The Willis Avenue crossing elimination is unique because it encompasses two separate crossings. The newly built underpass takes motorists safely underneath the tracks of the Main Line and the Oyster Bay Branch, helping vehicular and pedestrian traffic to flow freely, decreasing vehicle exhaust, eliminating warning bells and train horn noise and improving the community's quality of life.
MTA Construction & Development's timely elimination of the crossings is just one significant early benefit of the transformative expansion project, which also includes the renewal of stations, raising of bridges and upgrading of switches and infrastructure before crews add a third track to the LIRR Main Line to reduce congestion, expand the railroad's capacity by up to 50 percent in concert with service to Grand Central Terminal, and promote reverse-commuting to Long Island from New York City.
Together, the upgrades will help transform transportation across the region and provide a reliable, state-of-the-art rail system for Long Islanders. For more information on the 100+ projects set to transform the LIRR, visit aModernLI.com.