Chik-fil-A Preps to Open in Westbury

Chik-fil-A fans can expect a new franchise location on Long Island as of October. 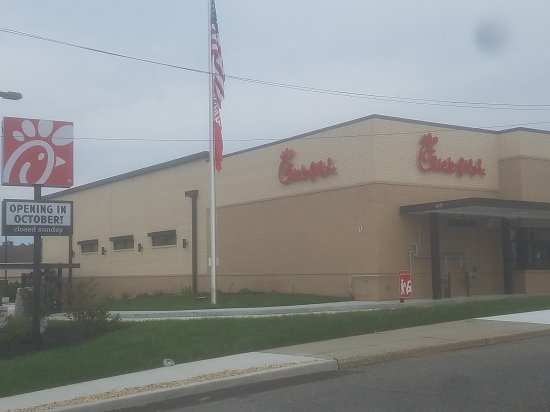 A Chik-fil-A restaurant is slated to open on Old Country Road, but you won't be able to drive into the restaurant from that main street.

Chik-fil-A, the popular fast food chain based in Atlanta, is gearing up to dot its "i"s,  spread its wings and open in Westbury.
The company -- which already has Long Island restaurants in Garden City, Hicksville, Commack and Port Jefferson Station --  plans to open its lateset franchise location in October at 1530 Old Country Rd. in Westbury.
Scott Buccellato is the operator of the fast foot eatery slated to open near a Popeye's and a McDonald's as well as many other restaurants and stores.
One source indicated the restaurant initially had hoped to open by the end of August, but as of early September was finishing with approvals and preparations.
Opening a Chik-fil-A restaurant is considered such a big deal, leading to such big crowds, that it's likely a police officer will lbe stationed nearby during the early days, if only to manage traffic that could back up far past the restaurant's parking lot.
The Chik-fil-A flag already flies next to the U.S. flag, near a sign indicating both that the restaurant will open in October and that it will remain closed on Sunday - one of its signature traits.
"Our founder, Truett Cathy, made the decision to close on Sundays in 1946 when he opened his first restaurant in Hapeville, Georgia," according to the company."Having worked seven days a week in restaurants open 24 hours, Truett saw the importance of closing on Sundays so that he and his employees could set aside one day to rest and worship if they choose - a practice we uphold today."
Chik-fil-A has grown to 2,400 restaurants located on streets, shopping malls, airports and college campuses across 47 states and the District of Columbia.
The chicken sandwiches remain a main attraction - along with the signature sauce that it dispenses with them.
The company ranked fourth in the Harris Poll Reputation Quotient list of the 100 most visible companeis in 2018, up from 25th the prior year.