The EOSPA Committee, whose members are selected by the Town Board, meets monthly. 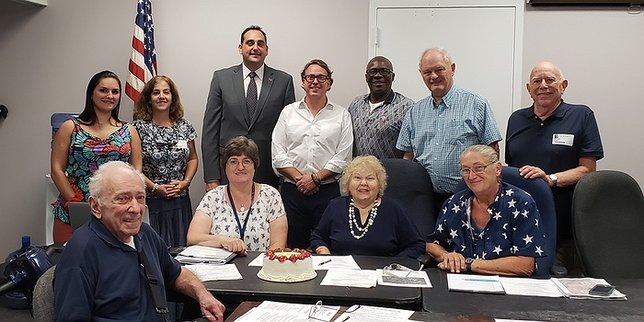 Huntington, NY - August 29, 2018 - Supervisor Chad A. Lupinacci met with members of the Environmental Open Space & Park Fund Review Advisory Committee (EOSPA) on August 14 at Huntington Town Hall for the committee’s 20th Anniversary.
“EOPSA funds allow us to preserve open space and make environmentally-conscious improvements to our local parks, such as the energy efficient lighting the Town Board recently approved for Manor Field Park,” said Supervisor Lupinacci. “Thank you to EOPSA members past and present for the work you do to keep Huntington green.”
The EOSPA Committee, whose members are selected by the Town Board, meets monthly. The Committee was originally created to develop criteria for implementation of the Town’s proposed Open Space Bond Act. Upon approval of the Bond Act by the voters in November 1998, EOSPA was conferred with the formal power to review, advise and recommend to the Town Board candidate open space acquisitions and park improvement projects for which Bond Act funds could be spent (Chapter 21 of Huntington Town Code). The program was extended to incorporate neighborhood enhancements and green energy-efficient projects by subsequent referenda in 2003 and 2008. EOSPA is currently responsible for oversight of funding generated by the 2003 $30 million and 2008 $15 million referenda.