Update: Joan Rivers Passed Away After Being Removed from ICU

Joan Rivers was in the intensive care unit since last week when she stopped breathing during a minor surgery; she passed away shortly after leaving the ICU 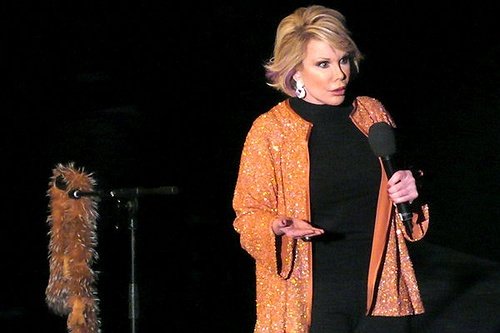 Update - 3:00 PM - Joan Rivers has reportedly passed away shortly after being taken out of the ICU at Mount Sinai hospital.

“It is with great sadness that I announce the death of my mother, Joan Rivers” her daughter, Melissa said in a statement. “She passed peacefully at 1:17pm surrounded by family and close friends. My son and I would like to thank the doctors, nurses, and staff of Mount Sinai Hospital for the amazing care they provided for my mother.

“Cooper and I have found ourselves humbled by the outpouring of love, support, and prayers we have received from around the world. They have been heard and appreciated.
“My mother’s greatest joy in life was to make people laugh. Although that is difficult to do right now, I know her final wish would be that we return to laughing soon.”
Original Story - September 4, 2014 - Nearly a week after Joan Rivers was admitted to the hospital after she stopped breathing during a minor throat surgery, daughter Melissa Rivers offered an update on her mother yesterday noting: “My mother has been moved out of intensive care and into a private room where she is being kept comfortable.”

As of Tuesday of this week, Rivers remained on life support. It’s unclear whether she continues to remain on life support with the move to a private room.

Daughter Melissa Rivers expressed appreciation for all the love and support she and her family has received since the incident, and offered the statement: “I know my mother would be overwhelmed by the continued outpouring of kindness and I want to thank everyone for keeping us in their prayers.”

It was a major scare for Joan Rivers’ family when she went into cardiac arrest and stopped breathing during a procedure at a clinic last week. She was admitted to Mt. Sinai Hospital in New York and has remained there since last Thursday.

Fortunately, Rivers has the support of friends and family who flew in immediately from California last week as she was put in a medically induced coma as medical staff evaluated the damage.

Joan Rivers’ series “Fashion Police” has been suspended this week and next week.